There's no doubt Coffs Harbour trainer Warren Gavenlock would have preferred Plonka to win the Country Championships Qualifier (1420m) on his home track but is rapt to be headed to Randwick following a gutsy win at Grafton on Thursday. 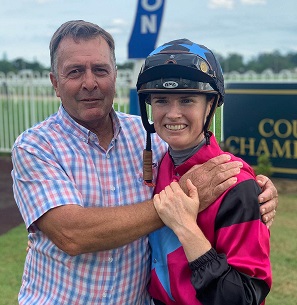 Coffs Harbour was scheduled to host the $150,000 Northern Rivers heat last Saturday, then Tuesday, but freak amounts of rain forced the qualifier back to Grafton.

As it turned out Gavenlock said the change of date was a blessing for Plonka who'd had something of a rushed preparation.

Plonka enjoyed a perfect run with jockey Rachael Murray parking him on an even tempo and he held off the favourite, the Matthew Dunn-trained Gracie Belle.

"It was disappointing for Coffs Harbour but it played well for us,'' Gavenlock said.

"We had those couple of quick back up runs, a heavy track run, a lot of people doubted Plonka could run the 1400m but I never did.

"The track drying, the alley and the extra couple of days really helped."

Murray echoed the trainer's sentiment about the benefits of the delay and venue change and was a confident jockey going into the race.

"I'm not going to lie, the extension of the qualifier to today gave him another four days to recover,'' she said.

"So everything worked out perfect and he's a good horse. I just love the horse and have so much faith in him so I didn't care where I was I just did my own thing.''

With their places in the $500,000 Newhaven Park Country Championships Final (1400m) at Royal Randwick confirmed, both Plonka and Gracie Belle are $15 chances in TAB’s market.

Gavenlock said he’ll consider his options as far as his next step with the four-year-old goes given the six weeks until Day 1 of The Championships.

“He will certainly need something, we will go home and settle down and think about what we have to do,’’ he said.

“We'll look at our options, have a good long talk with the owner and Rachael and take it from there. He'll give it a shake.”

A fourpeat of the Northern Rivers Qualifier wasn’t to be for Matthew Dunn but he’s adamant Gracie Belle won’t be out of place when she turns up at Randwick.

The grey didn’t appreciate a stop-start middle section of the race and as a consequence wanted to pull and check off heels but she finished off strongly when jockey Matthew McGuren got her to the outside on the turn.

“She got herself a bit upset in the yard and as a result it probably followed through to the race,’’ Dunn said.

“She just pulled a bit midrace and was a bit fresh, we floated her through for a few days which came against her.

“We’re disappointed she didn't win, full credit to the winner and the best horse won on the day, but she still gets her ticket to Randwick and she will certainly run well.”

There was a sensation before scratching time when the early favourite Hellenism was withdrawn with a hoof injury and it seems unlikely she will head to the Muswellbrook Wild Card on March 22.

All the results and replays from Thursday's Grafton meeting