Jenny Graham knows a thing or two about winning a Country Championships and she’ll be chasing her second at Randwick on April 4 with the promising Magnalane. 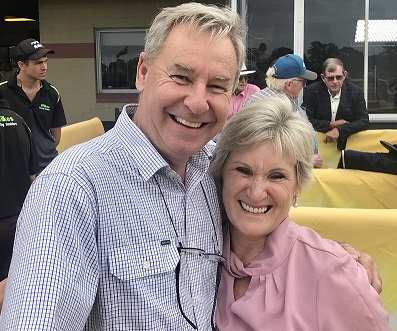 Trainers Michael Byers and Jenny Graham are off to the Country Championships Final.

The popular Port Macquarie trainer has a lofty opinion of the four-year-old and she was vindicated as jockey Samantha Clenton and Magnalane overcame a wide alley, and a late surge by local Casino Mondial, to win the $150,000 MNCRA Country Championships Qualifier (1400m) at Taree on Sunday.

Graham trained Victorem to win the 2018 Final and while she conceded her three runners in the 2020 series weren’t in his class she said there’s so much improvement to come.

“We missed a run at Port Macquarie, I was nervous going into it but I was just hoping we’d done enough work and it’s paid off,’’ Graham said.

“This horse had been working really well and we were so upset with the gate when the barriers came out.

Clenton was able to position the gelding in fourth place in the run and when they dashed for home early in the straight it looked like a one-act affair was brewing.

But to Casino Mondial’s credit, after a three wide run, he made it interesting and probably wins the race in one more stride.

“When I hit the front I thought he was going to give me six (lengths),’’ Clenton said.

“He does have a think about things but he has no gear on so going forward to the final he night need a bit.

“Full credit to Jenny, it hasn’t been easy for anyone in the last few weeks. He’s definitely a good chance in the final.”

Graham still has a big gun to produce in Awesome Pluck, who was scratched from the Taree race after drawing the outside alley. It's likely he'll head to Muswellbrook for the Wild Card on March 22 though Graham has yet to confirm that.

Taree trainer Michael Byers couldn’t have been happier with Casino Mondial, the horse who almost died 18 months ago due to a tumor in his groin which thankfully wasn’t cancerous.

The five-year-old was having his first run since November and while Byers wanted a firmer surface he’s heading to Sydney with gusto knowing how much improvement is in the horse.

“He was only half fit the horse, well eight out of 10, we missed so much work like a lot of people,’’ Byers said.

“With a bit more condition under him he will give them some shaking in Sydney.

“We’ve had so much trouble with the smoke and the rain, it’s nobody’s fault but we’ve been under the pump all the time. Just to run second it is fantastic.”

Casino Mondial’s jockey Raymond Spokes said he only needed ‘one more stride’ to pick up Magnalane.

Both Magnalane and Casino Mondial are now $26 in TAB’s market for the $500,000 Newhaven Park Country Championships Final (1400m).

All the results and replays from Sunday's Taree meeting