Girls In The 'Stirrups' Early At Goulburn (Monday)

Goulburn's first three races on Monday are highlighted by the fact that the female jockey contingent sits at over 50 per cent of the riders represented.

The tone is set early in the "Stirrups Maiden Handicap" with five of the 12 runners having female jockeys confirmed to take the reins. 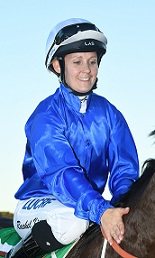 Jockey Rachel King is in action at Goulburn on Monday. (Pic: Steve Hart)

Races two (the Danny Williams Trainer of The Year Class 1 Hcp) and three (Billy Owen Apprentice of The Year Maiden Plate) follow a similar theme with nine female riders locked in across the 22 horses set to race in both contests.

"We are well down the track on productive discussions with stakeholders about a revamp of the female jockey facilities here at Goulburn," Ms Fife said.

"Something like that would entail a rebuild time of around three months minimum but be a well-directed investment of around $150,000. It would also incorporate an improved media facility for our broadcast partners."

Cooper gets a genuine chance to pilot home a winner for her Master, Danny Williams, in the same race that recognises Williams' home track premiership win for the 2018/19 season.

She will claim four kilos aboard top weight Acquittal who will be looking to bounce back off an uncharacteristic plain result in a Highway Handicap at Randwick last start.

Williams has also been supportive of Cooper on twitter recently, giving her the thumbs up for her two wins from as many race day rides in recent weeks.

Race 6 on the Goulburn card also throws up two other 'girl power' combinations with Kathy O'Hara taking the reins on So It Is for the Emma & Lucy Longmire team whilst Jess Taylor will pilot Titaness for recent mid-week city winner (Monegal) Theresa Bateup.

Titaness could be the value runner in the race after closing intently first up.

Punters looking for an early female win on the day could make "K" the payoff letter in the opener with Kathy O'Hara (Nijinska), Kacie Adams (Miss Demi) and Kayla Nisbet (Or Else) all aboard gallopers who have finished in the top four at their last outing.

Deanne Panya also has two rides early in the day as part of the female flavour for Goulburn's seven race card which kicks off at 1.10pm.

All the fields, form and replays for Monday's Goulburn meeting