Trainer Warren Gavenlock's advice to punters trying to figure out the NRRA Country Championships Qualifier (1400m) at Coffs Harbour on Tuesday is to not let the result of his horse Plonka's last run turn them off him.

Plonka finished fourth of 10 as an odds-on favourite in an Open Handicap over 1215m at Grafton on February 6 in a run that could have been viewed as disappointing, but Gavenlock didn't see it as anything like that.

"We were never aiming for the horse to peak in his first two runs back," Gavenlock said.

"We were aiming to have him ready for Tuesday. This is our semi-final, the race we've been aiming at all along, and you don't get match-fit staying at home. 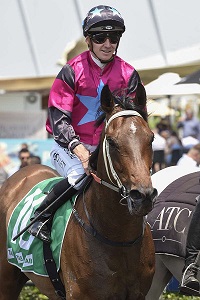 Plonka after winning a Highway at Rosehill. (Pic: Bradley Photos).

"Plonka's first-up run, when he ran second in an Open Handicap over 1000m at Grafton, he raced super and hit the line nicely.

"Then we stepped up to the 1200m, again in open company but on a heavy track that he wasn't used to. My instructions to the jockey (Rachael Murray) were to win if you can, but don't hurt him.

"He still got to the line quite OK, I thought, but, again, it wasn't our semi-final."

Plonka's last start, on a track rated as a Heavy 10, represented the first time the four-year-old gelding had raced on anything worse than a Good 4 track in his nine-race career.

Gavenlock, who also hopes to get Alternative Facts into the race, said the condition of the track was naturally a concern after the recent heavy rain.

He said he was sure he was thinking like most, if not all, other trainers in the race when he wished for a rating at least a couple of points better than a Heavy 10 on Tuesday, after the meeting was moved from Saturday.

"Obviously I'd like it to be on top of the ground," he said.

"I would say Plonka's clearly better on top of the ground, but up to an eight he'd still be effective.

"He raced against Benchmark 80 horses last start and he acquitted himself quite well. I think he's better than average, this horse.

"I'm happy with how those two runs back have placed him going into this race. He pulled up well and has done well since and when I left the stable he had his head in the feed bin and was very happy to be there.

"I'd like it to stop raining, probably the same as everyone else in the race. I don't think anyone really wants to run on a Heavy 10. But you accept the conditions and go out and do your best.

Coffs Harbour is Plonka's home track. This will be his first race-start there, but he has contested three barrier trials there and is obviously familiar with the surroundings.

All the entries, form and replays for Tuesday's Country Championships meeting at Coffs Harbour