Freedman's In Tune For Own Licence

He’s the latest addition to the Freedman training dynasty and William Freedman is keen to follow a trend set by several other young trainers across New South Wales and make his mark in the country.

As the son of trainer, and media personality, Richard Freedman it would have been an easy call for the 28-year-old to stay in the background and wait his turn but that all changed when his uncle Michael returned from Hong Kong and formed the Sydney Freedman Brothers training partnership.

It sewed the seed that the time was right for William to branch out on his own and he’ll start the new season with a base at Scone, strengthening a growing group of emerging trainers. 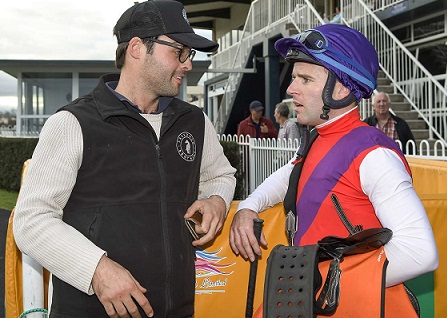 William Freedman, with Tommy Berry, has established a training base at Scone (Pic: Bradley Photos)

“I’ve always taken the mindset that I wanted to prove myself, whether that is a hindrance or advantage,’’ he said.

“When Michael came back it was only a logical progression that Michael and Richard would team up. It probably stalled my ability to go into a role of more responsibility.

“I want to get on with my career and do something for myself. While it wasn’t the first train of thought it ended up becoming logical for me to go down this path.

“It’s a great starting point in the country, the way it is structured, and seeing the success of the likes of Mitch Beer, Kody Nestor and Cody Morgan it gives young trainers a chance.

“Even with the client base that Richard and Michael have there are horses that don’t make the mark in town but they can earn prizemoney in the country.

“It wasn’t a difficult decision in the end when I got support from old friends and old clients who said that they would be feeding some horses my way.’’

Obviously Freedman has had an apprenticeship in racing most people would dream of – it comes from counting the likes of Lee, Anthony and Michael Freedman as uncles plus the experience in training and media from Richard.

What most wouldn’t know is that training wasn’t William’s number one ambition, he has a hidden talent as a singer and music was his first passion.

“When I came out of school horse training probably wasn’t the dream,’’ he said.

“I was in a band called Big Nothing, we toured around Australia a bit but it became clear I wanted to get into the horse industry after doing a stint up at Yarraman not long after university.

“Music is still a passion of mine but it’s something I enjoy doing for myself.’’

That stint at Yarraman led to working under respected horseman Greg Bennett and being accepted into the Godolphin Flying Start program, upon its completion William became part of his father’s new training business at Hawkesbury and they started at the bottom.

“To be honest that’s the thing I’m most thankful for, understanding how it starts because it is very daunting starting your own business,’’ he said.

“You have to keep producing a quality service with quality communication and then you’ve almost got to wait your turn when the luck comes.

“I want to get off to a good start. I’ve been very fortunate with the amount of support I’ve had.

“It’s vitally important you get going and get a roll on early because if you start too slow you can become a bit forgotten.’’

The Scone base Freedman has secured is a young trainer’s paradise.

He has 20 boxes at an off course farm called Dartwood Downs, leased from Barry McDonald, and it features a water walker, a treadmill and a sand track plus some turnout yards to give horses the chance to see a paddock regularly.

“Some horses don’t cope with the city environment,’’ he said.

“It’s quite popular in Victoria but it’s probably not exercised as much in NSW. While I will be a country trainer I’ll be trying to attract as high quality horses as a I can because that’s the name of the game. 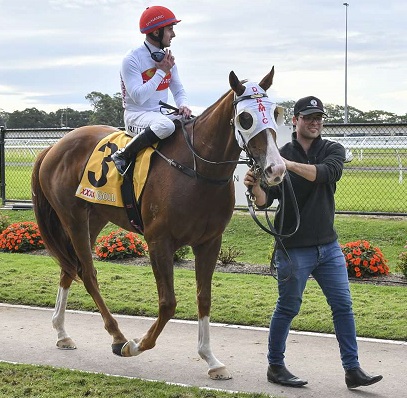 William Freedman says his famous family background is a good head start as he steps out on his own. (Pic: Bradley Photos)

“I take a lot of confidence out of knowing I have had an apprenticeship to arguably some of the most successful trainers that have been around in Australia.

“Knowing if I can follow their structures and mentality to training it is a successful model. I know the model works, if I can implement the same system and keep the quality up like all my uncles do I know I have a model that can be successful.”

Then there’s another ace in his partner Rachel Hunt, a talented jockey in her own right who can provide valuable first hand information on each horse.

“Rachel is my number one trackwork rider at the moment, she’s still a licensed jockey and will be doing trials and bits and pieces,’’ he said.

“It’s a huge benefit having her in my camp. As anyone would say when you’re working with your partner there can be some challenging moments but it’s beneficial having a great quality rider and someone I can brainstorm ideas with.’’

Owners are crucial to any racing business and as Freedman alluded he’s been buoyed by the support from the likes of Meredith Park, June Baker, Dynamic Syndications, John O’Neill and OTI.

But it’s not just the established names that lead him to have confidence in what lies ahead, it’s the growth seen in country racing since the inception of Highway races, the Country Championships and The Kosciuszko that says new owners want to be involved too.

“It gives a lot of country trainers something to work towards,’’ he said.

“Even just a Highway is a grand final for a lot of owners. I’ve been blown away with the amount of people who want to get into racehorses at an affordable price.

“There’s a demand from people to own horses, even in that younger age bracket, and now we have some young trainers out in the country it’s appealing to them a bit more.

“It’s not as daunting as going to the very successful older trainers and saying I want to get involved at a small level.

“I’ve been given support by some really good owners and powerful owners in the industry and they are taking a leap of faith with me so I hope I can repay them.’’