It's a small world when an eight-person syndicate can win a slot in the $1.3 million The Kosciuszko and pair up with a horse that spells at the property of two syndicate members and whose teeth are treated by a horse dentist who is also a syndicate member.

And a match made in heaven judging by the delighted reactions of syndicate organiser Alison Hush, from Luskintyre, in the Hunter Valley, and trainer Todd Howlett, who prepares Kosciuszko contender Two Big Fari at nearby Lower Belford.

"I had a friend call me not long after the draw was posted and asked if it was me, because it came up as just a TAB account holder at Luskintyre," Alison said. 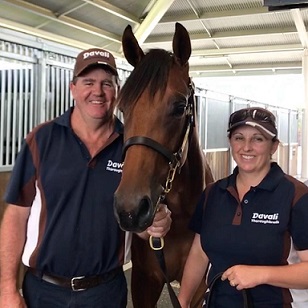 David and Alison Hush and their friends selected Two Big Fari (not in the picture) after winning a Kosciuszko ticket.

"Then we read the numbers out together to make sure it was right, and, yeah, it was very exciting. All a bit surreal, actually.

"I got a call from Racing NSW and quickly made calls to the other syndicate members and the consensus was to go for Two Big Fari. I quickly rang Todd and he was at the trials and fortunately no other slot owners had contacted him at that stage.

"He said, 'Really, really, you've got a ticket? That's so wonderful'.

"There was a little bit of negotiations over the prizemoney split and Todd obviously had to contact the owner (James Hack) to discuss that and it was all done quickly and everybody's happy."

Hush said the syndicate comprised a group of four couples who were all good friends and who each had some involvement in racing.

They are Alison and her husband, David, who run Davali Thoroughbreds which breeds, races and spells horses, Todd Hattam and Brooke Terry, Shaun Hush and Kylie Simpson and Kelvin and Tracey Mather.

"Todd is a horse dentist and looks after Todd's horses, so he does Two Big Fari's teeth, and he and his partner also do some work for us," she said.

"We put in $100 each every year and buy 160 of the $5 tickets. I buy them through my TAB account for the syndicate only, so that there's no confusion.

"If I'm a winner, we're all winners. This is the first time we've won a slot and we're all over the moon about it.

"I know Todd very well and it's going to be great to be associated with him in something like this."

Howlett's racing business is very a family concern. He describes his wife, Anika, who does the books and works around the stables, as "the backbone".

Their daughter Macey, 17, also rides work and helps around the stables when she's not doing a TAFE accountancy course.

He said the fact some friends who had won a slot had now become involved with the family in The Kosciuszko campaign made it all the more enjoyable.

"It makes it a lot more fun for everyone," he said.

"The owner, James, is very happy it's all been done. Todd already does a great job with our horses' teeth and I imagine if he checks out Two Big Fari's between now and The Kosciuszko he'll be doing it with even more care than usual!

"I'd heard there was a winner from Luskintyre, so when Alison rang I thought, 'Maybe...', so it was a great surprise.

"I hadn't had any other calls from slot winners before that, but I got a few afterwards and obviously had to knock them all back. Hopefully it pays to get in quick!"