With a comprehensive victory in the recent Tuncurry Cup under her belt, Lady Evelyn looks set to take the next step towards Port Macquarie Cup glory with victory in the Stowe Australia cup prelude at the track on Sunday.

After settling midfield in the early and middle stages, Andrew Gibbons was able to power the Reset mare over the top of Keep Up and Zoffany’s Lad in the straight to claim the Tuncurry feature.

Despite stepping up in weight from recent appearances, the daughter of Glorious Lady has earned the impost and looks well suited over the journey with the promise of racing on a good surface adding further confidence.

It is significant that prominent Newcastle trainer, Jason Deamer, has again engaged Gibbons for the mount as Lady Evelyn attempts to improve on her record of eight wins and stake earnings of over $200,000 in progressing towards the club’s feature.

With first and second placegetters exempt for the ballot for the $200,000 Carlton Draught Port Macquarie Cup on Friday 11th October there is a great deal at stake for the event on Sunday with Temprado and Dew Drop featuring prominently in discussions.

The Pierro gelding, Temprado, burst back into calculations with a decisive victory over He’s a Given at Wyong three weeks ago and the Kylie Gavenlock stable is confident of a forward showing.

There are plenty of positives surrounding Dew Drop following success in Class 2 company at Coffs Harbour two weeks ago with the Eavesdropper gelding learning from every run. 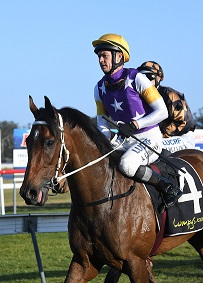 With the John Sprague stable on a roll, there will be a great deal of confidence surrounding the local hope, particularly with connections of Cullingworth electing to race at the Gold Coast on Saturday.

O’Driscoll would be another chance for followers of the Tas Morton yard following an even run in a recent Grafton Open Handicap while a case could be drawn for the grand campaigner, Scotty Be Gotti.

There will be plenty of interest associated towards the Kris Lees debutant in the opening event, I am Scared, following a recent barrier trial victory at Wyong on soft going.

The I am Invincible gelding looks to be a horse possessing ability and punters would be wise to follow the betting trends in assessing his chances with Serbelloni looking the obvious danger following five placings from his twelve appearances.

Dynasty Di looks set to improve on a narrow second behind I’m Jacko at Bowraville last weekend for Neil Godbolt in the fillies and mare maiden while Estroverto deserves strong consideration in the following event.

Mr Piquet seems a safe wager in the Benchmark 58 following a maiden victory at Kempsey and narrow second behind Steamboat Sally at Muswellbrook while Star Raider could cap a great day for the Kris Lees stable with victory in the last.

Excellent trackside amenities will be in full operation with full bar, bistro, BBQ and wagering facilities with patrons welcome to enjoy the comforts of the Ivan Livermore Stand.

Following Sunday’s card of racing, all roads lead to Port for the cup carnival with the club leaving no stone unturned in ensuring the best possible two days of racing for the highlight of the mid north coast racing year.

Day one features the Carlton Draught Port Macquarie Cup on Friday 11th October with massive prizemoney of $200,000 on offer and this race will be complemented by the Birdon Group Sprint and Hastings Cup.

The support provided by Racing NSW has ensured that other events on the card will carry minimum showcase prizemoney of $30,000 and the following day features a strong program sponsored by Steeline Australia.

All the fields, form and replays for Sunday's Port Macquarie meeting