Ballina trainer Ethan Ensby was far from impressed the first time he laid eyes on Unleash The Red earlier this year and wondered if it was worth the trouble to try to get the gelding back to the racetrack.

“He looked horrible, he had absolutely nothing going for him at all,” said Ensby, who has done a remarkable job to get the chestnut racing so well this preparation. 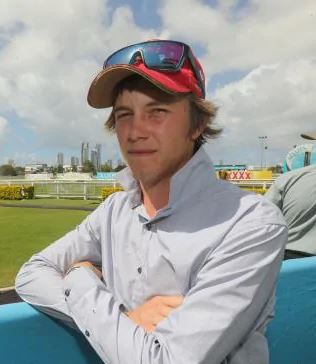 Unleash The Red chases his second win from four starts this campaign when he lines up in Monday’s XXXX Gold Class 1 & Maiden Plate (1910m) at Ballina.

Ensby is having a great season with 13 winners so far, including his first metropolitan success with Partnership at Eagle Farm on October 26. But Ensby’s effort to get Unleash The Red racing so consistently well has given him almost as much satisfaction.

Unplaced in his first two starts in Victoria, the Rip Van Winkle gelding was briefly with former Ballina trainer John Everson before he decided to retire.

“John had only had him a very short time and hadn’t had a chance to do anything with him before he retired from training and I took him over,” said Ensby.

“He had hair about three inches thick and he’d just stand in his box and look miserable. He just wasn’t right. And he had one club foot, but there was no major damage there, and we finally got his feet right.”

Ensby had a farrier, chiropractor and dentist work extensively on the gelding’s various ailments and he eventually started to improve.

Unleash The Red had his first start for Ensby at Murwillumbah back in June when the gelding ran unplaced in a Maiden. He was then sent for a spell.

“It’s been a massive effort by everyone involved to get him right again,” said Ensby.

“It was probably a mistake to give him that run at Murwillumbah and I sent him to the paddock straight away, not really sure if I would even bring him back into work.''

But he did bring Unleash The Red back into training and the four-year-old eventually started to show some signs that he had some ability.

“About a fortnight before he was set to resume, his trackwork started to improve and now he’s really turned the corner and has raced really well in his three runs this prep.”

Unleash The Red started at $101 when he resumed at Grafton on October 21, finishing strongly to be beaten just under a length when third in a 1400m Maiden.

Ensby thought he was a good thing at his next start, but most punters seemed to have ignored that strong first-up effort as Unleash The Red started at $18 when he won second-up over 1710m at Grafton on November 6.

He produced another good effort at his latest outing when he didn’t have the best of luck when third to Royal Factor in a Class 2 over 1710m at Grafton on November 18.

“Stepping up to the 1910m on Monday should suit him down to the ground.

“He’s a big lump of horse who is better suited on a bigger track, so I just hope he handles the tighter Ballina track. And I hope he hasn’t drawn ‘too well’ in barrier one and gets caught up on the fence.”

Unleash The Red runs third at Grafton on November 18

Ensby also thinks his two other runners on Monday – Maximalist and Shinar – are also capable of getting into the finish of their respective races.

Maximalist has a win and three placings from her past five starts and did a good job last start when third to Prince Of Arran and Daunting Warrior in a Lismore Class 1 (1510m) on November 11 when she covered a lot of ground out wide.

“She drew awkwardly at Lismore last time and it’s a similar scenario at Ballina, but her work on Tuesday was enormous – the best she’s worked this prep - and with a bit of luck on Monday I expect her to be right in the finish.”

He expects a bold effort from Shinar if he can dictate out in front.

“If he can get to the lead without much trouble he can just keep going, but if he’s back in field he tends to get lost,” he said.

“And Shinar and Maximalist both get around Ballina okay, which helps.”

All the fields, form and replays for Monday's Ballina meeting