Dunn Relying On Strength In Numbers For Championships Fourpeat 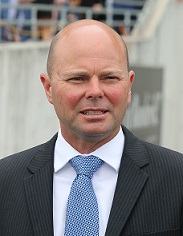 The Murwillumbah trainer is strong on numbers, he will have between five and seven runners, but is short a horse of the class of those three previous victors Perfect Dare (2017), Snitz (2018) or La Scopa (2019).

“We have some nice horses in there and we’re not without a chance,’’ Dunn said.

“They are around at the right time and are in good shape. We’ve had those horses that were short priced favourites but put it this way I don’t have a horse going into it off winning Brisbane races.

“It’s hard to work out where these horses line up. The favourite (Hellenism) is a horse that won a Highway last start and I think Brisbane Saturday grade is lengths better than Highway level.’’

Dunn has seven of the 17 horses remaining in the $150,000 NRRA Country Championships Qualifier (1400m) – he accepted with 10 but has scratched three – and of those said Leshrac and emergency Cinnamon Missile would be unlikely runners if the track is heavy.

He said the change of dates and venue hasn’t been ideal, the race was originally due to be run at Coffs Harbour last Saturday, but nobody is complaining about receiving welcome rain.

“It’s disrupted them a little, it’s not unmanageable and if you’re reliant on one or two gallops you’re probably doing something wrong,’’ he said.

“But we were setting them for last Saturday then Tuesday, now Thursday, so when you’re trying to taper them into races it’s a bit tricky but everyone is in the same boat.’’

The horse that fits Dunn’s benchmark for being a live Country Championships chance is Gracie Belle who was a first-up midweek Doomben winner on New Year’s Day then finished a close fourth at a Sunshine Coast metropolitan meeting almost four weeks ago.

The mare leads Dunn's hopes according to the betting at $6.50 with TAB, stablemate One For Betty is a $7.50 chance while Our Echo is at $11.

“She should have probably won at Saturday level last start and that’s the measuring stick,’’ he said.

“She won at her first start for me and probably shouldn’t have won and she should have won second-up so I think she is the best of mine. Her soft track form is okay.’’

Dunn also has plenty of time lightly raced four-year-old Our Echo who posted his second career win at the Gold Coast on January 29.

While his record only reads two wins from nine starts he was thrown in the deep end as a three-year-old and performed creditably without winning.

“Our Echo was racing against Group and Listed company last preparation and his first-up run was strong in a really good race,’’ Dunn said.

“He was good to win second-up and he’s a horse going the right way.”

Gracie Belle runs fourth at the Sunshine Coast on January 25

Of his other contenders, Dunn said One For Betty is up to Brisbane Saturday company and thus meets his standards but is concerned the delay is working against her at the end of a long preparation, Sleepy Heart will need the Grafton track to improve while Dreaming Of Biscay would be an each-way chance.

One For Betty won first-up at Grafton in late October and has raced through the summer save for a freshen up following a closing second at Doomben on January 1.

“We’ve had to stall her prep a little bit because after her last start we said we could go to the paddock or come here,’’ he said.

“She’s done well, she trialled well here a couple of weeks ago and it’s just whether you can hold them together that long.”

First and second from the Grafton Qualifier earn spots in the $500,000 Newhaven Park Country Championships Final (1400m) at Royal Randwick on April 4.

All the fields, form and replays for Thursday's Grafton meeting featuring the NRRA Qualifier