Dubois Between Rock And Hard Place To Get To Championships Final

The major issue for trainer Jean Dubois with newly anointed Country Championships Final favourite Julian Rock is how to plot his way to Randwick on April 4. 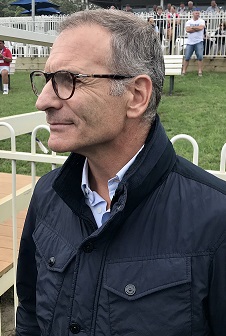 Julian Rock led in an all Goulburn trifecta in the $150,000 SERA Qualifier (1400m) at Mourya on Sunday as the French five-year-old easily accounted for Tash Burleigh's Al Mah Haha, who won the race at Goulburn last year, and the Kurt Goldman-trained Irish Songs.

“Now we have to keep him fresh and happy,’’ Dubios said.

“Should I run again, should I trial? It’s tricky. If it was two or three weeks it’s easy but six or seven weeks, it’s a long gap.’’

It’s a good problem for Dubois to have as he now has the early favourite, at $8 with TAB, for the $500,000 Newhaven Park Country Championships Final (1400m).

Dubois had some pre-race nerves about Julian Rock jumping from an inside alley but once jockey Jean Van Overmeire showed him some clear air on the home turn, as leader Assault’n’bathory drifted off the fence, the race was over very quickly.

“We needed a lucky trip because he had to follow the rail and go on the inside and he did the rest,’’ he said.

“He loves the soft, his form in France on the soft was good but he's a funny horse and likes to have his room.’’

When asked whether Julian Rock is good enough to win the Final, Dubois played diplomat but said he knows he has a very capable galloper and if he gets his favoured conditions will always produce his best.

The win continued jockey Jean Van Overmeire’s successful return from injury and he now has a huge chance in the biggest country race in Australia to go with a likely first Golden Slipper ride on Dubois’ smart filly See You Soon.

“Julian Rock really let rip there, when I asked him, he found a couple of lengths very quickly,’’ Van Overmeire said.

“I know he is a good horse on his day so it didn’t surprise me. He’s in top shape.”

While a Country Championships runner is a first for Dubois, Tash Burleigh is rapt to have a second shot at the race with Al Mah Haha.

Of course Al Mah Haha didn’t take his place at Randwick last year after being a late scratching at the barrier leaving connections and Burleigh to wonder what might have been.

The gelding, ridden by Koby Jennings, settled midfield in the three wide line and showed plenty of resolve as he attempted to chase down the winner, failing by a length and a half.

Julian Rock wins the SERA Qualifier at Moruya on February 16

“Hopefully he behaves himself this time,’’ she said.

“That was a massive run. He was caught wide and flushed wide on the turn, it was a little bit of a replica of last year, but it suits the horse because he’s a big striding animal.

“It’s all worked out well and I’m really happy with how he attacked the line.’’

Al Mah Haha had his place slashed to $11 for the Country Championships Final.