Sawtell's large group of owners will be guaranteed to party late into the night if their 'omen bet' can land Sunday's $27,000 Sawtell Cup (1515m) at Coffs Harbour.

Trained locally by Brett Dodson, Sawtell is raced by Sawtell Racing, a syndicate of about 40 owners. The majority of the syndicate are from Sawtell, the coastal village just south of Coffs Harbour.

What are the chances of a horse called Sawtell, raced by Sawtell Racing, winning the Sawtell Cup? 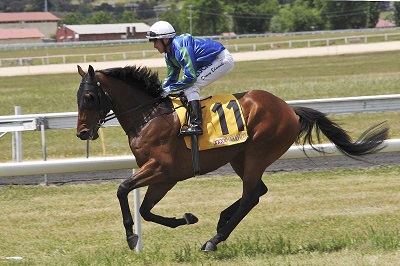 Sawtell is the omen bet ahead of the Sawtell Cup (Pic: Bradley Photos)

Well, he's in with a lightweight chance and the owners are all set to enjoy the experience.

"They will certainly light up the town if this horse can win the Sawtell Cup for them, that's for sure," said Dodson. "They are a great bunch of owners who love to get to the races.

"Many of them have raced horses separately before forming this syndicate and then purchasing Sawtell from a Ready To Run sale over in New Zealand.

"Obviously they'd love to win the Sawtell Cup with him but it may have come a year too early for him. I think he's really going to mature into a really nice country cups horse next year.

"But he's been racing very well lately and definitely goes into Sunday's race with a chance on his recent efforts."

By the former Group One-placed NZ sprinter He's Remarkable, Sawtell has so far won three races and been placed five times from his 21 starts. He's been a model of consistency so far this year, finishing in the placings in four of his past five runs.

He was just beaten by Surprise Bullet over 1600m at Eagle Farm five runs back on May 1, then followed placings over 1600m at Taree (twice) and Wyong. He wasn't suited by the heavy conditions at Grafton last time out but still ran a creditable fifth behind Bodega Negra in the South Grafton Cup (1615m).

"He didn't like the heavy at all in the South Grafton Cup but he was still moving into the race before he hit quicksand and it was a leader's track that day anyway. He wanted to lay in in that race at Eagle Farm back in May and probably should have won."

Sawtell, to be ridden by Matt Bennett, has drawn barrier 12 in Sunday's 13-horse field in what shapes as an open race.

"He is coming back from the mile to 1500m, but there looks to be a lot of speed and with a lot of pressure up front hopefully he can get into the finish on the big Coffs Harbour track."

The winner of the Sawtell Cup is exempt from the ballot for the $150,000 Coffs Harbour Cup (1600m) on August 1, but win, lose or draw on Sunday, Dodson said Sawtell was more likely to head to the paddock.

Dodson is yet to win a Sawtell Cup, but that certainly isn't the case with Taree trainer Ross Stitt who has virtually made the race his own over the past decade.

Stitt, chasing his sixth win in the race since 2011, will saddle up Editors and Cash Spinner in Sunday's race.

In the past eight runnings of the Sawtell Cup, Stitt has landed the race five times and finished runner-up twice. He won with Southern Shimmer (2011), Single Spirit three times (2013, 2014 and 2016) and with Shazza's Bubbles (2014). Single Spirit also finished second behind the Barry Ratcliff-trained Malleable in 2017 and Stitt was runner-up again with Blinkin Artie behind the Sally Taylor-trained Eight Below last year.

Editors tackles the race first-up since May when he raced very consistently, winning  races at Port Macquarie and Gosford in April before being narrowly beaten by Present Sense in the Gunnedah Cup (1600m) at his most recent outing on May 19.

Cash Spinner, formerly with Grafton trainer John Shelton, has had four runs since joining Stitt, her best result was two starts back when she powered home late to finish third to O'driscoll and Fuel in the Wauchope Cup (1506m) at Port Macquarie on June 16.

There are a host of other chances in Sunday's race, including the Grafton galloper Cool Prince, just touched off by Evopex in last Sunday's Maclean Cup at Grafton, last-start South Grafton Cup winner Bodega Negra, the Newcastle gallopers Achi Baba and Golly Miss Molly, and the in-form Armidale galloper Nistelrooy, winner of three of his past four starts.

Local sprinter Gunnaza is chasing his second win in the Blinkan Missit Prelude (810m) on Sunday after taking out the race last year, beating Always Sacred and Chilli Zaim.

The Mick O'Neill-trained rising nine-year-old has a solid record on his home track, winning three races and filling the placings four times from his nine starts there.

Check out the fields, form and replays for Coffs Harbour on Sunday.