Family took jockey Blaike McDougall to Albury in mid-2018 and it’s for family that he’s keen to qualify talented mare Bennelong Dancer for a second shot at the $500,000 Newhaven Park Country Championships Final.

It’s no secret the 24-year-old struggled for consistency in the tough apprentice ranks in Sydney but since he and partner Danielle Scott made a fresh start things have been looking up. 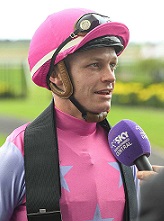 “Danielle is from Albury and she had to spend the last three years in Sydney for me and my career,’’ McDougall said.

“It was well known I wasn’t going as well as I should have been for a while and she missed her family.

“And we started a family, we have an 18 month old daughter and we have another little girl due in April.

“It’s paying off now, I’ve settled in and am riding consistently which is the main thing.’’

McDougall is just coming off a suspension but has already ridden 47 winners this season just past the half way mark – last season he won 44 races all up – so he’s more than happy with the move.

Bennelong Dancer is trained by Danielle’s mother, Donna Scott, but was prepared for last year’s Country Championships series, where McDougall rode her to second in the Wagga Qualifier and fourth in the Randwick Final (at $201), by her grandfather Graham Hulm.

So when he partners the five-year-old in Saturday’s $150,000 SDRA Country Championships Qualifier (1400m) at Albury he has plenty of family riding with him again.

“I probably feel a bit less pressure riding for them to be honest,’’ he said.

“I know the horse and there’s nothing better than to see the joy it brings her mum and pop and the rest of the family.

“I think she’s had the perfect lead up for this race, it’s the race she’s been targeted at. I like the prep she has had, I’ve been lucky enough to ride her all her work and trial her.’’

McDougall has the advantage of experience on a number of Bennelong Dancer’s rivals for Saturday’s Qualifier but is adamant he wouldn’t swap for another runner, though he’s very wary of the Gary Colvin trained Forever Newyork.

That’s because since he relocated to Albury he’s been riding a lot for the Wagga trainer including a win where Colvin's sprinter, a subsequent Canterbury winner, held off Bennelong Dancer.

“It was a tough decision to tell Gary I wasn’t going to ride Forever Newyork,’’ McDougall said.

“I did think about riding that horse but I’ve gone with my gut and it just felt right to ride Bennelong.’’

That clash happened on Christmas Eve at Wagga and Bennelong Dancer was given a short break so she hasn’t raced since but showed her fitness running down O’ So Hazy, who beat her in last year’s Qualifier, in a 900m trial.

And McDougall said there’s no question about his mare’s readiness despite the gap between runs.

Bennelong Dancer wins a trial at Albury on February 8

“We gave her a lot of time to get over last year and she’s a lot bigger and stronger and a lot sharper in her work.

“Normally I would give her a quieter trial but the race being seven furlongs, and even though she’s fit, I wanted to make sure she trialled well.’’

Such is McDougall’s faith in Bennelong Dancer he really doesn’t care where the mare draws in the 16 horse field. He only cares about having a trouble free run.

“It’s going to come down to whoever gets the right run from the 600m,’’ he said.

“You can put her anywhere you want. I’d be happy to draw 16, just so I can come back and get a bit of cover, get her comfortable.

“I just want room, I don’t want to be waiting for gaps to open up. I want to get her into clear room and she will do the rest.’’