For Mudgee trainer Cameron Crockett, winning Sunday’s $150,000 CDRA Country Championships Qualifier (1400m) has nothing to do with the big picture.

A place in the final at Randwick is the reward for running first or second but Crockett said, while he'd love to have just his second runner in the $500,000 Newhaven Park Final in April, he’s not looking past the potential big payday ahead for the owners of one of his six horses.

The popular local trainer is represented by Ori On Fire, Barbass, Caprera, Andy’s A Star, Meraki Miss and Soul Secrets – the most he’s ever saddled up in one race.

“I reckon five of them are winning hopes and the other little filly will try hard and won’t disgrace herself,’’ Crockett said.

“I’d be pretty confident that all of them will run a good race.

“I know that when my horses go to the final they might not be competitive because it will be really strong.

“I don’t think there is a Victorem or Clearly Innocent but that Goulburn qualifier has six horses that could probably win the final.

“But if you can win the heat that’s over $76,000 to the winner and that pays for their whole career, and probably another horse as well, for the owners so you’ve got to go for it.’’

Ori On Fire, who’ll be partnered by champion jockey Hugh Bowman, is having his third attempt at the Country Championships.

Ori On Fire runs third at Orange on February 16

The gelding was beaten less than two lengths, at his fourth race start, at Wellington in 2017, and finished third in the testing conditions on his home track last year.

He then ran a close fourth in the Wild Card at Muswellbrook so missed out again.

“I think he would have given it a really good shake last year if it wasn’t for the rain,’’ Crockett said.

“I was pleased he won that Highway (in December) because he was deserving of a good race.''

Ori On Fire was beaten by the Dean Mirfin pair I Am Capitan and I Am Magnificent, both rivals again on Sunday, at Orange two weeks ago but Crockett warned he wasn’t at his top.

He said he learned something after last year’s wild card, where he was too fresh, that he tested out on Ori On Fire in the lead up to his third, and likely final, Country Championships attempt.

“He went to a Highway after Muswellbrook and ran out of his skin,'' he said.

“At the end of last year we ran him in open company at Mudgee and I knew he was a touch underdone then he went to the Highway and won.

“Then we gave him a freshen and took him to Orange for his clean out and I think he will be spot on for Sunday.’’

Just about all of Crockett’s runners could warrant a story of their own.

Barbass looked like being smart as a two-year-old but over the last 18 months has endured a fractured pelvis, an injury in a shoulder nerve, a virus and colic.

With those issues behind him Crockett has been rapt with what he’s shown in two runs back with big weights. 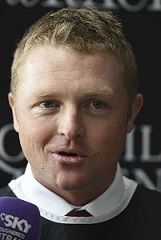 Andy’s A Star will be ridden cold from a wide barrier and Crockett said last time that scenario presented at Mudgee he produced a cracking performance.

Caprera has had just two starts in the past two years with quarter crack injuries and has also been a problem child when it comes to the barriers.

He showed the ability Crockett has long seen in his first-up second at Rosehill just last Saturday.

“I think he could be anything, I think he is well above your average country horse,’’ he said.

Meraki Miss is Miss Consistency, according to Crockett, and if he’s ironed out her tendency to over race he feels she’s a big chance.

Then there’s Soul Secrets, admittedly a throw a stumps with a promising Class 1 horse but Crockett believes she won’t get another shot at the Championships so she deserves her place.

Nothing is guaranteed, though, and Crockett’s immediate problem is making sure he has enough people power and racing gear for the big say.

“It’s going to be a bit different, we have six strappers which is a bonus but I don’t know if I have six race bridles,’’ he said.

All the fields, form and replays for Sunday's Country Championships meeting at Mudgee