Cowra warhorse Zarhron doesn’t have a lot in common with the likes of Winx, Tie The Knot and Manikato.

Those champions have managed to etch their names into racing folklore through their dominance and extraordinary feats on the track.

Like Winx and Tie The Knot, though, Zarhron has achieved a rare feat of winning the same feature race four years running and on Sunday the nine-year-old will attempt a fifth successive Cowra Japan Cup (1200m). 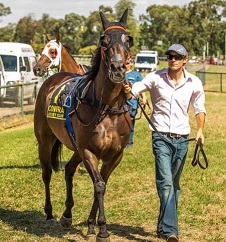 Sure, the Cowra Japan Cup is not a Cox Plate or Chipping Norton Stakes. It’s not the William Reid that Manikato won five times from 1979-1983. Everybody knows that.

But it’s an achievement trainer Andrew Molloy can be proud of to bring the horse he calls “The King” up year after year, lumping big weights, and giving the gelding’s owners, former NRL star Ashley Gilbert and his family, a ride to remember.

“He’s been very good to us for a long time,’’ Molloy said.

“He’s been at the top of his game for five or six years now. First graders don’t play first grade forever.

“I didn’t think he’d be here for five. After the weight last year (carried 63kg) I thought he’d be living the good life but there’s no reason to stop.

“Once he retires he’s retired forever, there’s no coming back.’’

Molloy isn’t sentimental when it comes to Zarhron – he leaves that to the Gilberts and his own family – but he recognises that the horse is a one of a kind.

“I like the horse, there are a lot of people here in the family that see him as special,’’ he said.

“My little daughter is four and she loves him, she says Winx is the best horse but Zarhron’s better.’’

To bring Zarhron’s deeds into more relevant perspective than lining him up with Group 1 champions he’ll be out to better another former top sprinter in winning a country feature five years running.

Apprentice Chris Williams, who did the steering in the 2018 Cup, brings Zarhron in with 61kg for his fifth attempt and Molloy said his recent form is misleading.

After a solid first-up run at Canterbury in October, Zarhron had a setback heading into his 39th race start at Moruya and Molloy regrets making the trip there.

“We screwed him down for the dream of The Kosciuszko but it mixed his preparation up,’’ he said.

“He went well first-up but there was no improvement left in him. It’s taken this long to get back on track.

“He had a little setback before Moruya and I didn’t listen to anybody who said travel him down the day before. It’s like going to the danger zone going down that mountain.''

Molloy is more than pleased that Zarhron has the 2kg drop on last year but he said it’s reflective of the race having a lot more depth.

But the gelding only knows one way and he’s in his own backyard which is an advantage he’s happy to have.

“He knows the markers, he knows where the three is and where the two is and is just going flat out off the bend,’’ he said.

“He can kick off the turn which a lot of horses can’t do.

“To be fair to the opposition last year it wasn’t a fair dinkum open handicap but this year it is a proper open.

“Chris will just sit and steer. If he gets beaten we don’t have any gripes or excuses. He’s going as well as he ever was, there’s just new horses coming through.’’

While he knows Zarhron will run his usual honest race and be hard to beat, Molloy said he’s bullish about the chances of Welcome Art in the Cowra Cup (1700m).

Welcome Art carried 60kg to a second-up win at Orange and drops 4.5kg with Billy Owen riding 1kg over. It's a kilogram Molloy is happy to concede.

“Billy clicks with the horse, there’ll be no dead weight,’’ he said.

“He’s been set for it and every indicator has been perfect. His first two runs have been better than expected.

“If he gets beaten it’s because the others are a little better than him.’’

All the fields, form and replays for Sunday's Cowra meeting