The past two Country Championships heroes Victorem and Noble Boy head TAB’s opening market on this year’s $1.3 million The Kosciuszko (1200m) at Royal Randwick in October.

TAB released all-in markets for a number of Sydney spring features on Monday including the Epsom Handicap and Golden Rose.

Potential slot owners are spoilt for choice when it comes to contenders for the second running of the country only feature on Everest Day – won last year by Belflyer.

Jenny Graham's Victorem, who defeated Noble Boy in winning the Hinkler Handicap in Brisbane last weekend, shares the $4.50 line with Todd Blowes’s stable star ahead of the Matt Dunn trained Care To Think ($6.00) and Gayna Williams’ promising I Am A Cool Kid ($8). 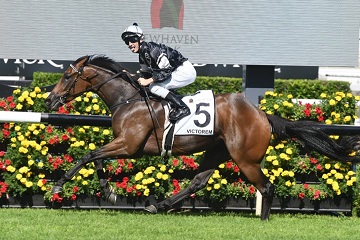 Victorem is the early equal favourite for the $1.3m The Kosciuszko. Photo: Steve Hart.

“We couldn’t split Victorem and Noble Boy who head the market at $4.50, they are both proven performers at the top level and both love Randwick.

“It’s a deep market with plenty of chances and there will no doubt be plenty of betting interest.’’

Last year’s Kosciuszko placegetters Awesome Pluck ($11) and Suncraze ($15) plus past Country Championships placegetters Don’t Give A Damn ($15) and Bennelong Dancer ($15) are in the mix.

Defending champ Belflyer is on the $26 line.

An announcement on when the $5 Kosciuszko tickets will go on sale to the public, prior to the draw for the owners of the 12 slots in the race, is expected soon.

Godolphin dominated the two-year-old Group 1s in the autumn and it’s a pair of their colts in Sires’ Produce winner Microphone and boom colt Tassort that share the top spot at $11 in the Group 1 Golden Rose (1400m).

In a wide market, Champagne Stakes winner Castelveccho, who could tackle the race first-up, is at $15 along with Cosmic Force, Prince Fawaz, Kubrick and the exciting Exceedance.

"It is impossible to go past this year's Inglis Sires' winner and Golden Slipper runner-up Microphone,’’ Middleton said.

“He heads betting with the other Godolphin runner in Tassort who was a one-time favourite for the Golden Slipper before going to the paddock early with an injury.

"Prince Fawaz was impressive winning the J J Atkins at Eagle Farm on Saturday for Anthony Cummings and will be trying to emulate The Autumn Sun who did the double last year."