Colvin Happy To Be Forever The Country Championships Underdog

Wagga trainer Gary Colvin would be happy to take the underdog tag into the $500,000 Newhaven Park Country Championships Final if his top seed Forever Newyork earns a spot there at Albury on Saturday. 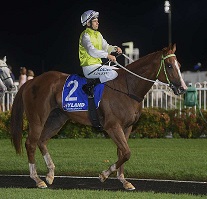 Forever Newyork has his second shot at the Country Championships at Albury on Saturday. (Pic: Bradley Photos)

With a little frustration, Colvin said the Southern Districts form is dismissed each year as inferior but you only have to look back 12 months to see the area’s representatives can be competitive.

The SDRA’s qualifiers in 2018 were O’ So Hazy and Bennelong Dancer and they ran third and fourth respectively at huge odds.

“We race against the best horses here, we get Canberra and David Hayes from Victoria but people don’t seem to rate us,’’ Colvin said.

Forever Newyork has taken Colvin to the Final before, as a three-year-old in 2017 having finished second in the Qualifier, and the gelding would be a rare case of a horse getting a second chance two years later.

It hasn’t been by design, though, as Forever Newyork was being set for last year’s Qualifier on his home track but succumbed to what they call ‘White Line Fever’ which is a disease affecting the wall of the hoof.

“With white line you have to cut it all out and let another hoof grow and that’s what happened last year.’’

Colvin said the five-year-old is “100 per cent’’ right for his second chance in Saturday’s $150,000 SDRA Country Championships Qualifier (1400m) on the back of successive wins including a Canterbury benchmark 70 earlier this month.

“It was a nice win at Canterbury and he’s gone on pretty well from there,’’ Colvin said.

“The only thing I was surprised about was when it rained because I didn’t want a wet track.

“We were quietly confident he would run a big race but I started to worry because he never really performed on a wet track.

“This is the best we’ve ever had him. We’ve planned it all along how it was going to work and it’s work out well so far. I’m going into the race and I can’t fault him.’’

Jake Duffy will again ride Forever Newyork, who is $26 in TAB's Country Championships market, and Colvin could have two runners in the race if Tully Toff pleases him in trackwork on Tuesday morning.

The four-year-old posted back-to-back Wagga wins in December but has been bought undone in two subsequent starts by wet tracks and finished last behind current Country Championships favourite Noble Boy at Warwick Farm on February 9.

“He doesn’t want a wet track, he was shocking at Warwick Farm but he didn’t like the track,’’ he said.

“He’s a big horse and once he starts slipping and sliding he throws it in.’’

Colvin said Tully Toff, who has won three of his 13 starts, did a lot better in the paddock following those Wagga wins than he thought so may have also needed the racing.

The question of whether he’s up to the task at this stage won’t be answered until he lines up on Saturday.

“He’s improving, it’ll be very interesting to find out if he is good enough,’’ he said.

First and second from the Albury Qualifier earn their place in the $500,000 Newhaven Park Country Championships Final (1400m) at Royal Randwick on April 6.

All the fields, form and replays for Sunday’s Country Championships meeting at Albury