Colvin Chasing Country Championships Reward For Another One

You’re never sure if it’s the right move to sell a promising horse when an offer is made because what price do you put on the joy it can bring you. 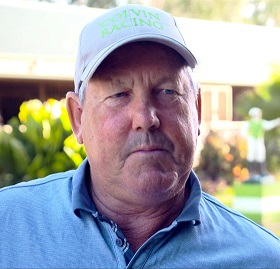 Wagga trainer Gary Colvin is satisfied he and Another One’s owners made the right call when they knocked back overseas bids of around $400,000 for the three-year-old last year and now the focus is on the rich paydays associated with the Newhaven Park Country Championships.

“It’s bloody hard to make a decision,’’ Colvin said of the offers.

“I said to them ‘what do we do? We can take the money and go and buy a couple more horses and they could be no good'.

“You spend half your life trying to get a half decent horse. If he keeps developing the way he is we will have a lot of fun with him.”

When Colvin attended the Inglis Classic Sale in 2019 with a friend they were looking for a horse that was basically readymade and hadn’t even considered the son of Super One.

Until the chestnut strode past them.

“I didn’t look at him before and I was just looking at the yearlings parading around and he just caught my eye,’’ he said.

“When we go to the sale we try to pick something that has developed pretty well. He still has some developing to do but we’ve come this far so we might as well give it a crack.

“He started off pretty good, he was a very leggy looking horse but he moves over the ground like a gazelle.”

So far Another One has raced six times for three wins and a second and both his misses have come with excuses in TAB Highway races at 1200m.

For the latter defeat, a battling sixth as favourite behind Katgully Red at Randwick on February 6, Colvin blames himself with the decision to put blinkers on backfiring. They're coming off for Saturday's race.

“There were a few factors, he was right on the fence and no one went there the rest of the day and when he moved off he started making ground again,’’ he said.

“I didn’t put the blinkers on when he won the start before but I thought back to 1200m I’ll put them on. I probably shouldn’t have.”

Colvin has been to the $500,000 Newhaven Park Country Championships Final (1400m) at Royal Randwick once before with Forever Newyork in 2017.

He finished runner-up in the SDRA Qualifier at Albury, but was unplaced in the final behind Free Standing, and ran third, again at Albury, two years later.

But Another One is a different story, he’s so lightly raced and Colvin knows there’s more to come from the gelding than what we’ve seen to date.

“We threw Forever Newyork in the deep end and he ran a big race to just get beaten and when we took him to town he didn’t perform. He wasn’t quite a 1400m horse but this bloke will get it.

“Your home track is like playing football on your home ground. I’m very happy to have it here.

Another One wins at Randwick on December 19

“This is the first time we’ve had a real good show on our home track. He doesn’t mind the sting out of the ground but this track is probably the best in country NSW.”

It’s likely Colvin will also accept with Sizzling Cat in the Qualifier though his preference is to run in a Benchmark 58 over the Championships distance.

The three-year-old has only had four starts and was a maiden winner over a mile at Wagga in October so to throw him into the Class 5 event would be a big ask.

“He looks like being quite a handy horse but he’s only had four starts,’’ Colvin said.

“If he draws well in the other race I’ll probably have to go there for the easier option.”

All the entries, form and replays for Saturday's Country Championships meeting at Wagga