Coffs Harbour racing officials are hoping locals will embrace the club’s first opportunity to be a part of the Country Championships phenomenon on Saturday week.

Since its inception in 2015, the Northern Rivers Qualifier has been staged at Grafton but Coffs Racing chief executive Tim Saladine said the club has worked hard to win the right to host the $150,000 race.

“We’ll hopefully get 2500 people here and the town’s pretty excited for it, especially being on a Saturday,’’ Saladine said. 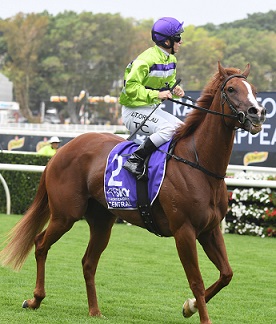 Hellenism is one of the leading Coffs Harbour chances in the Country Championships Qualifier on February 15 (Pic: Steve Hart).

“The last couple of years we’ve been keen to hold the meeting. In fairness to Grafton, Bob Pavitt and Michael Beattie supported our submission and were happy to see it go to another club and share it around.

“So we were stoked to get it and we look like having six or seven (locally trained) runners and to have one qualify would be even better.’’

The Country Championships series is held at seven centres across New South Wales, plus a wild card at Muswellbrook, with each region sending the first two horses across the line to the $500,000 Newhaven Park Final run over 1400m at Royal Randwick on April 4.

As Saladine alluded, the Coffs Harbour trainers are likely to be heavily represented on February 15 and they will be aiming to end Murwillumbah trainer Matthew Dunn’s domination of the Northern Rivers heat having won the past three Qualifiers.

“We have some good quality horses like Hellenism and Plonka and a lot of the horses are locally owned so it has created a lot of interest,’’ he said.

“Matty has got to come down here and beat us on our home turf.

“The Northern Rivers is a strong and big region, Grafton is a traditional racing centre whereas Coffs is a bit more of a party town but we’re coming back as a racing club.’’

Hellenism, trained by Aiden St Vincent, has won three of her five starts and was a recent winner of a Highway race at Randwick, while Warren Gavenlock’s Plonka was a Highway winner in November and tuned up for the Qualifier running second at Grafton late last month.

The CEO could have a personal interest in the big race as a part owner of four-year-old gelding Galway, trained locally by Brett Dodson, if he squeezes into the final field.

The race day, which coincides with feature racing from Royal Randwick, will have a beach party theme and Saladine said there’ll be plenty of children’s activities. Entry will be just $10.

“Being a Saturday we want to get as many punters and people out here, we think it will be a good social day for people to come out and see some great racing,’’ he said.