Over 500mm of rain in the last seven days has forced Coffs Harbour Race Club to transfer Saturday’s planned Country Championships meeting to Tuesday to allow the track time to cope with the deluge.

But as an incentive for locals to support the new date the club will throw open the gates with free entry and will shout the bar if a Coffs Harbour trained horse wins the $150,000 feature.

CEO Tim Saladine said 100mm of rain on Wednesday night left water on the track and in some of the public areas and the surface would have been unraceable on Saturday.

“We had a walk on the track and the tanks are going as hard as they can but they have nowhere to pump it,’’ Saladine said.

“We are tidal so we are waiting for low tides to take it away. We need four low tides to get rid of it all which will get us to Sunday morning and it will be raceable after that. 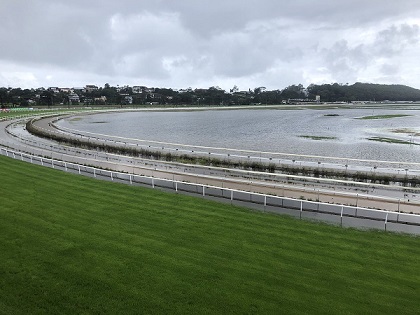 Coffs Harbour after receiving another 100m of rain overnight taking the week's total over 500mm.

“With a clear day Monday and Tuesday we will have a pretty good track by Tuesday morning.’’

Consideration was given to staging the meeting on Monday but in consultation with Racing NSW the decision was made to allow an extra day given a favourable forecast.

It means Coffs Harbour will race alongside Muswellbrook on Tuesday and with the new timeslot Saladine said it gives trainers the chance to lure riders from Sydney to compete at the meeting.

He said if the forecast is correct and the drainage system does its job he would expect the track to come up a heavy 8 for racing on Tuesday.

“We were battling bushfires here in December and now we are battling floods, that’s just the way it is,’’ he said.

“It was great for everyone to make the decision quickly and come up with a new date so everyone knows where they are at.’’

A number of Coffs Harbour trained horses will line up in the $150,000 NRRA Country Championships Qualifier (1400m) including the promising Hellenism, trained by Aiden St Vincent, Warren Gavenlock’s Plonka and Galway, part-owned by Saladine, for Brett Dodson.

Saladine encouraged locals to be trackside to cheer on ‘Team Coffs’.

“If you’re good enough to come along, it will free entry and free entry to the members to thank anyone who comes out to support us,’’ he said.

“And if a Coffs horse can win we will shout the bar.’’

Acceptances for the Coffs Harbour meeting will be taken at 9am on Friday with fields released soon after.