Coast Coup For One Of Williams' Main Championships Contenders

It’ll be a low key kick off for Coup De Main’s Country Championships bid at Sapphire Coast on Sunday but trainer Danny Williams hopes it will be an ideal springboard into the rich country series.

So long as the Sapphire Coast track is on the improve the four-year-old lines up in the Bega Betta Home Living Handicap (1200m) with the spot of Williams’ number one seed up for grabs.

Coup De Main hasn’t raced since a gallant second behind the unbeaten Noble Boy, who he’ll meet again in the Goulburn Qualifier on March 2, at Rosehill on December 1.

“He is up there with the better grade of horse of mine,’’ Williams said.

“We were planning on running him next Saturday but I think we need to be conscious of the horse’s benchmark.

“He had a jump out during the week and we thought we’d look at a soft option to raise his rating.’’

The gelding is burdened with 61kg in the Class 2 event and will be conceding 3.5kg or more to his rivals.

Williams warned the $1.70 TAB favourite is naturally not at his top for his first-up run but he’s expecting class to shine through.

“While he’s not quite wound up he wasn’t wound up when he got beaten by Noble Boy and he’s in a similar position,’’ he said.

“He had fitness on us, we were underdone and I expected him to be ridden a bit more conservatively. I thought he should have finished a little closer to Noble Boy.”

It could be a huge day for the Williams stable and he’s booked jockey Chad Lever to ride each of his runners at the showcase meeting.

Aside from three short-priced favourites, he’s strongly represented in the two feature races, the $50,000 Bega Cheese Showcase Cup (1600m) with Narooma Cup runner-up Green Sweet out to go one better and the $35,000 Tanja Park Stud Sapphire Coast Cup (2200m) with Biodynamic chasing back to back wins.

A week after 2016 Albury Cup winner Tom Melbourne broke his long running drought Green Sweet, whose last win was the 2017 Albury Cup champ, will aim to snap an 18 start run of outs in the Bega Cup.

Williams said the import had been a source of great frustration since he took over from Jean Dubois as trainer but saw enough in his Narooma Cup placing, where he was run down in the dying stages by Le Cavalier, to suggest he’s close. 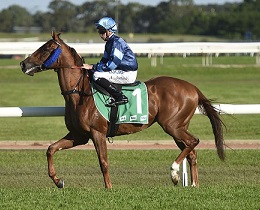 “I thought we were home the other day, I don’t think he saw that horse coming,’’ he said.

“He’s not a genuine wet tracker and if the track is drying he will be very hard to beat.

“He’s knocking on the door, he’s not far off a win. He has the ability, he just has to rekindle his interest in wanting to do it.’’

Green Sweet will carry 62kg and meets Le Cavalier 2kg better at the weights for a neck margin.

Biodynamic was winless for almost three years prior to his breakthrough at Moruya last month courtesy of a gun ride by Mitchell Bell.

The six-year-old steps up to 2200m in the closing race of the Sapphire Coast carnival and Williams expects him to take beating again if the track is playing fair.

“Traditionally the Sapphire Coast has been a track where you need to race on the speed, hard against the fence it can be a bit biased,’’ he said.

“Those horses that get back in running will need luck. It was a very good ride the other day on Biodynamic.

“He was in all sorts of traffic and he’d have been a good thing beaten had he not won. He’s taken confidence from that and he will be very hard to beat.’’

All the fields, form and replays for Sunday’s showcase meeting at Sapphire Coast