A riding comeback of courage and pure inspiration by jockey mum Samantha Clenton continues where she is in demand with six rides at Tuesday’s Scone TAB meeting.

After a two-year absence that traversed career threatening injuries, and also motherhood, Samantha - the premier NSW apprentice in 2015-16 with Kris Lees - has outridden her allowance at Provincial and Country meetings but can still claim 2kg in the city.

Samantha has live chances throughout Scone’s eight-race TAB programme, for Lees and also other stables.

An emerging young star when initially indentured to Lees, Samantha suffered horrific injuries in an October 2016 fall at Scone after an earlier mishap at Taree. 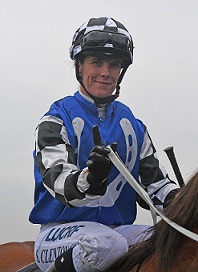 “She’s been amazing after what’s she’s been through and being a mum - her dedication to make it back,” Lees said.

“She travels five days a week to ride work, race days and one day off.”

After the Scone accident, Samantha was told by surgeons that multiple spinal fractures could well have confined her to a wheel chair.

The birth of a son Isaac, now almost two years old, was a blessing and the driving force for Samantha.

And through recuperation and uncertain times, the unwavering loyalty, support and urgings of Lees, could not be understated.

As Samantha weighed up the riding risks again with motherhood.

Eventually Samantha returned to ride track work and barrier trials and became a gym regular. She drives pre-dawn from her Muswellbrook home to ride work at Newcastle for Lees.

Kris relentlessly encouraged her to return to race riding with the guarantee of opportunities with the record breaking Provincial and Country premiership stable.

After sustained work and barrier trialling, Samantha finally made a comeback to race riding in early March.

And as her confidence and timing returned, the career defining moment arrived when Samantha rode the Lees trained Turnberry to win the Wyong Leg of the Polytrack Provincial Championship in late March.

Her poise and strength prevailed in a pressured photo finish. The winners have been regular enough since combining with Lees, and also ample opportunities for other stables.

On Tuesday at Scone, Samantha’s six rides includes three for Lees, She’s Tickets in the third event, Silver Melody in race five, and her best credentialed Mummentum who is a Kiwi mare coming off a strong Taree Maiden win and a Newcastle trial into the seventh event.

Lees considers his best on the day to be Love Delight in race six.