Championships Wait Is Over For Norm And His Mate

Some horses are named by their breeding, for a family member, after films and songs but in Waiting For A Mate’s case his moniker describes exactly what he seemed to do as a young horse learning the ropes.

Trainer Norm Loy explained the grey had a stop-start way of taking to his work and it was a turn of phrase used by his son Rylie that inspired the name. 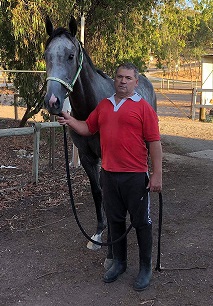 Albury trainer Norm Loy with Waiting For A Mate.

“Rylie, Brodie’s younger brother, was riding him trackwork and he’d get a bit in front and he’d baulk and prop and nearly dump him,’’ Loy said.

"He’s a very capable rider, probably could have been better than Brodie, but he got a bit too big and the horse nearly got Ryles a few times.

“One day I said to him ‘what are you doing’ and he’d say the horse is ‘just waiting for a mate dad’. The other horse would be behind him and he was just waiting for him.’’

The name Loy applied for was actually ‘Justwaitinforamate’ but it was knocked back so they decided to simplify and so Waiting For A Mate it became.

Fortunately for the promising four-year-old he doesn’t do a lot of waiting on the racetrack and Loy is somewhat bullish about his chances in the $150,000 SDRA Country Championships Qualifier (1400m) at Albury on Saturday.

Waiting For A Mate actually broke his maiden status at the Championships meeting at Wagga last year and two impressive wins at the start of this preparation told Loy he’s a contender.

“I wanted to race him last year in the greys race at Flemington but we had to go to the paddock and it was probably a blessing in disguise because now we’re in the Championships.

“He’s a horse that will go on and do good things later on, at this stage I’m concentrating on the Championships and that’s where I want to be.

“After this run he’ll go to the water walker for a month and prepare for the Final.’’

That’s a fairly confident statement considering the Southern Districts Qualifier is shaping up as the best renewal yet for an area that is working hard to improve its stock.

Loy said since the gelding’s two wins on his home track in mid-December and early January he’s purposely thrown him in deeper city class races in Melbourne to toughen him up.

“I wanted to test his ability against better horses and he went super,’’ he said.

“He was a bit unlucky at the Valley, he got off the bit and on the wrong leg. If you’re going to go for something like the Championships you have to have them at their top.

“I think this is the strongest one we’ve had so far and there are some genuine contenders in there.''

Mathew Cahill, unbeaten in two rides on Waiting For A Mate, will ride the horse on Saturday and Loy said it’s a big advantage to have the Qualifier on his home track.

Stablemate Squaw Valley will provide an able back-up to Waiting For A Mate and Loy warned the lighty raced galloper shouldn’t be underestimated despite not contesting a race beyond 1100m.

The gelding won easily over 900m at Albury on January 5 then met with misfortune when beaten two lengths by Jester Angel in a 1000m dash at Wagga.

“He’s only been running over 900m and 1000m but if he gets a nice relaxed run early he has one of the best sectionals of any horse over the last 400m,’’ Loy said.

“He had no luck at all at Wagga. The prep I’ve given him is longer work because I know if he settles he’ll definitely run the 1400m.

“I wouldn’t discard him, I reckon he deserves his chance.’’

Loy’s only Championships starter so far was Butler Butler who pulled up with an issue after he finished near the tail last year.

First and second from the Albury Qualifier earn a spot in the $500,000 Newhaven Park Country Championships Final (1400m) at Royal Randwick on April 6.