Championships Shot A Labour Of Love For Loy Family

“If everything falls into place it's going to get pretty emotional for me.”

Anyone who knows Brodie Loy’s journey over the past couple of years would see why it’ll be a special moment if he can ride Ilovesaki to victory for his father, trainer Norm Loy, at Albury on Saturday. 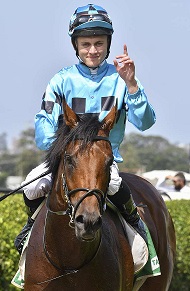 If you’re not aware, just a couple of years ago, the now 23-year-old was doing his best to throw away a promising career in the saddle as he spiralled out of control, fuelled by a drug problem, with an utter disregard for his own life let alone what he was doing to those who love him.

It cost him almost two years on the sidelines, a damaged reputation and contact with his young son.

As all parents do, Norm and Natalie Loy didn’t give up on him – though they were tested – and that’s why Brodie wants to repay them by winning the $150,000 Southern Districts Country Championships Qualifer (1400m) and sending them to Sydney for the Final in April.

“People would say I had the world at my feet when I was 18 and lost everything through stupidity, not stepping up and asking for the help I needed at the time,’’ Loy said.

“My mum and dad bailed me out of a lot of trouble I was in. I look at how far I've come from doing drugs and going completely off the rails. I didn't care about my body or my life.

“I’ve had to come back from that, I'm not the only person that has been able to do it, and it is satisfying to be able to repay my family.

“It's comforting knowing that part of my life is over and I'm focusing on the good things.”

Since his return to the saddle in August, Loy has ridden over 40 winners and recorded a Group 3 placing on last year’s Country Championships winner Noble Boy at Flemington in November.

It’s a successful comeback to riding by anyone’s standards and there’s a determination in Brodie to make the next six months even better. He knows there are people who want him to fail, but those who want him to succeed drive him.

“I'm not getting the opportunities in town or provincials like I'd hoped just yet but from two years ago contemplating my life to now living in Cronulla with a nice apartment and getting my life back together I’m doing well.

“The only person I need to make proud aside from my family is my son. I haven't seen him in nearly two years and I miss him every day.

“The trust I've lost with my ex-partner, I'm trying to build that back up.”

Faith in his son is something Norm Loy never lost though that trust was stretched at times.

A year ago the father-son Loy combination in any race, let alone one of the richest races in the district, seemed unlikely – both would admit that – but here they are.

“He has a lot of convictions but to his credit he is working hard. I'm very proud of that.

“You want to see your kids do well. We would have never dropped him, we stuck with him 100 per cent and helped him through the hard times. What an emotional day it will be if he gets up.’’

With the scratching of News Girl, the Loy team’s emerging four-year-old Ilovesaki assumed the mantle of favourite with TAB at $3.60 on the back of two impressive wins.

The gelding made the leap from a Benchmark 58 win at Wangaratta a month ago to an almost five length win in the Championships Preview (1400m) at Albury on February 4.

Ilovesaki wins at Albury on February 4

“I'd say he is a good chance but he has to improve again,’’ Brodie said.

“If he can improve each start by two to three lengths he will be hard to beat. We weren't supposed to be in the field a month ago, we're happy he's there with a genuine chance.

“If he didn't win we won't be upset about it, he's well and if he gets beaten there's always next year.’’

There’s always next year – that’s something that Brodie probably wouldn’t have considered at the height of his problems.

But he says racing has the ability to change your life.

“I’ve only been back six months and to sit back and realise the opportunity I have to repay Dad and book the ticket to the big dance, how great is that?”

First and second from the Albury Qualifier earn a spot in the $500,000 Newhaven Park Country Championships Final (1400m) at Royal Randwick on April 4.

All the fields, form and replays for Saturday's Albury meeting featuring the SDRA Qualifier