Budler An Apprentice Finally On The Rise (Queanbeyan Monday)

At a tender 36 years Damon Budler, incredulously, is a first season 3kg claimer and just about old enough to be a parent of opposing apprentices in a heat of the Rising Star series.

Apprenticed to Rob Potter at Canberra, Budler is far from being in the same league, or riding on the same race tracks, as his established South African riding peers Glyn Schofield, Robbie Fradd, Barend Vorster in SA, and Springbok newcomer Brandon Lerena making an impact with Bjorn Baker. 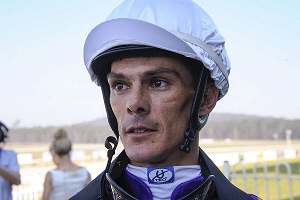 But Damon is no rookie.

“He rode track work for a lot of years in South Africa and six or seven here for Canberra trainers - he’s a real horseman, rode a double at the Sapphire last week,” explained Potter.

“He’s married with a young daughter so he’s trying to make a career in the pro ranks.

“It’s not too late to make a go of it in the country.

“Horses travel for him, lovely hands, field sense and judge of pace already. He was a rep gymnast back home, so he’s got natural co-ordination and strength.”

Budler has three rides on Monday, Potter outsiders Pink Moscato in the fourth race, the Rising star heat, and in the fifth event, Congenial Mistress.

His best chance is Original Prankster in the last, off a winning treble in far easier Picnic and non TAB meets.

“We haven’t been chasing rides, we’re taking it real steady while Damon gets more race experience and I’ve got nothing flash in the stable right now,'' he said.

“I told him at his age, we’ve got to get it absolutely right. He understands it’ll be tough. He’s got field sense and we didn’t let him use the whip when he started race riding.

“I told him once he outrides his allowance, it’s just cut throat.

"Capable apprentices get plenty of opportunities with bigger claims.

“Once they outride allowances, it can dry up real quick with so many world class riders here.

“But there’s opportunities for Damon in the country with so many meetings and top prize money these days.''

Budler wanted to start at the picnics but Potter explained at 54kg he was just too light to accommodate riding weights in the high 60kg’s.

All the fields, form and replays for Monday's Queanbeyan meeting