Brodie Jumps At His Second Chance

Everyone deserves a second chance and jockey Brodie Loy says he’s motivated not to waste his.

What the 22-year-old hoop has to prove is that the Brodie Loy of today is someone who has learned from his mistakes, now that he has claimed ownership of them, and is determined to put his talent to good use. 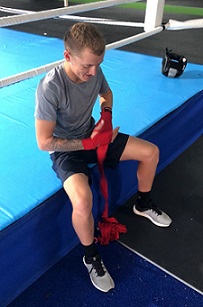 Jockey Brodie Loy has been working hard on his fitness in preparation for a comeback from an 18 month ban.

There was a moment, a short time after the reality of being thrown out of racing for 18 months sunk in, Loy woke up to himself.

“I could definitely feel myself going off the rails but accepting that I was is a different story,’’ he said.

“I went out one night and I woke up a couple of days later and went ‘this is not for me, this is ruining my body and I’m losing control’.

“I had no one to turn to and my family were on the brink of saying this is enough. I think I had no purpose, I lost myself and was just partying too much and got caught in the end.’’

On Friday, Loy will have his first race rides since February 2018 having served a 12 month disqualification handed down by stewards for giving false evidence and another six months on drug related charges.

Three further months of his suspension was stayed upon completion of drug counselling so Loy returns to race riding knowing he’s on notice.

“I panicked and didn’t think of the consequences beforehand. I tried to see if I could somehow manoeuvre so I didn’t get into any strife,’’ Loy said.

“That was stupid on my behalf. I copped a big whack because of it.

“Looking back on it, I can’t take it away and I look forward to trying to make up for everything I’ve lost over the last 18 months.’’

What he’s learned in 18 months in the real world is his career as a jockey is a privilege.

Loy tried working for an electricity company on the Gold Coast and returned home to Albury where he found some work concreting, but quickly discovered the rewards for that work couldn’t compare to what he got out of being in the saddle.

It was only after hitting the bottom, when he woke up from that fateful bender, that he contacted the Jockeys Association for help and, with assistance from Racing NSW, started the process of getting his life in order.

“That was my second chance. Being able to ride has just come with it,’’ he said.

“That’s a privilege and I’m not going to let anything happen to that again, the second chance was getting my life back.

“It was hard getting work and that’s when I reached out. My life was taken away from me and I had to go do something different.’’

Loy says his weight is under control and he’s feeling fit ahead of a big comeback weekend.

Brodie Loy wins on Makeadane in the Bega Cup back in February 2018 (Pic: Bradley Photos).

Aside from being allowed to ride trackwork at Albury for the past month or so, he’s been spending plenty of time with a personal trainer working on his fitness and has taken to boxing as part of that regimen.

“I have races Friday, Saturday and Sunday which is great and I’m looking forward to jumping back in,’’ he said.

“I want to ride winners, be in people’s eyes a decent person and someone that can help others not make the same mistake.’’

This is not the first time Loy has been absent from the riding ranks – in early 2016 he quit the sport for 10 months as he struggled to ride light, something that’s not easy when you’re 174cm tall.

Perhaps the constant health battle he endured as an apprentice, which caused friction with his former masters in Sydney, was an early warning sign.

He’d broken up with his partner, and mother of his now three-year-old son Arlo, and felt a lack of purpose but pushed it down and pressed on like most proud young men can do.

“I don’t think anyone has questioned my ability to succeed, it was more whether I wanted to do it,’’ he said.

“I feel like I still have to find something for after riding, I’m not going to ride forever, but at this point in time I’m so focused on getting back into the winner’s circle and being a good person.

“A lot of people go through hard times. The main thing for me now is to get back to a situation where I can spend time with my son again and build that trust up.’’