Superstar jockey Hugh Bowman will ride at the Coonamble Country Championships Qualifier meeting on Sunday in a massive boost to a day the people of the western districts town were already looking forward to enormously.

The horse is owned by Peter and Louise Webb who are long-time friends of Bowman's parents, Jim and Mandy.

Bowman will also ride two horses owned by his parents - Scottish Soldier and Chastise - among half-a-dozen rides he is set to have on the day once the fields are finalised. 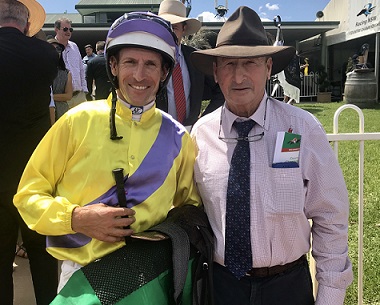 Hugh Bowman and his dad Jim at the Mudgee Country Championships on March 1.

The rider most famous for his association with all-time great Winx was originally from the central-western town of Dunedoo and remembers riding at Coonamble as an apprentice, but this will be the first time he has ridden there in over 20 years.

"It's good to be going back up there," Bowman said.

"It's great to have the championships qualifier in Coonamble. It's a wonderful concept.

"I have ridden at Coonamble - only once, or maybe twice - but it was many moons ago. I haven't been there since I've been in Sydney and I came to Sydney in 1999."

The only other Country Championships Qualifier meeting Bowman has ridden at this year was at Mudgee on March 1, when he rode Electrified in the CDRA Qualifier and the horse advanced to the final by finishing second. Bowman won minor races on Scottish Soldier and Chastise that day.

Bowman has a very busy calendar. He is riding in Melbourne on Saturday and will fly back to Sydney on Saturday night and take another flight to Coonamble on Sunday morning.

Being country born and bred himself and knowing what the locals have been through with the drought in recent years, he is happy to make the trip and support the meeting and is taking his family along for the ride.

"These are the type of occasions that get the community up and about and they've had a bit of rain recently, so obviously the mood's going to be a bit better than it's been for a while," Bowman said.

"Everyone will be keen to join in on a bit of social activity and I'm glad I can be a part of it.

"I'm well aware of the interest it creates by my being there and I just thought it would be a really nice thing to do for the town and the people, given what everyone's been through.

"My wife, Christine, and our kids are coming as well so it's going to be a nice family day."

Lundholm will have multiple runners in the qualifier and said it was a "fantastic result" for his stable to be able to secure Bowman to ride one of them.

"They'll come from near and far to see someone like Hugh Bowman in action up close," he said.

"It's going to give the meeting a huge boost and it was already shaping up fantastic. Hugh's riding a horse I part-own as well - Thiswilldous - so I'm really looking forward to that. It's going to be a great day."