Borham Lays Down The Law

It's often said to be a lawyer you have to love the law. The same theory applies to training racehorses.

Ben Borham is a qualified solicitor but two years ago he made the career, and lifestyle, choice to chase his passion for horses.

It wasn't a snap decision and no trainer just becomes one overnight.

Ben has spent the best part of two decades cutting his teeth behind the scenes, somehow fitting it in through completing his law and accounting degrees and any other available time.

"I really enjoy the law and academia but legal practice is just another commercial venture,'' he said. 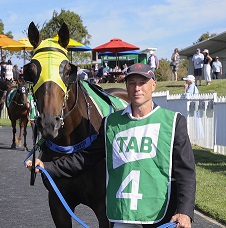 "I was disappointed with the way the profession, particularly litigation, worked. On the whole, it wasn't about justice or the clients, it was about game-playing, positioning and making money for the firm.

"That got grating particularly as there was more and more pressure.''

Borham had a glimpse of a future that could easily be his when his supervising partner at the firm had a breakdown and he was thrown into that role much sooner than planned.

Closing in on 40 at the time, he could see himself heading in the same direction.

He was overweight, living a sedentary lifestyle and not enjoying life so made an early move out of law and into racing.

"I love working with horses and I missed being away from them,'' Borham, now 42, said.

"When I could dip my toe into some horse racing cases it was like heaven to me when I was practicing.

"I'd always planned to go back to racing, much to the chagrin of my dad, a fellow trainer, who had been trying to steer me away from racing my whole life. To his credit, he understands that once I set my mind to something I do it, and he has since become a big supporter.''

Aside from growing up with a father who shared a passion for racing, some of racing's great minds have shaped how Borham is approaching training his team.

He talks of ‘essentially stalking’ Guy Walter at race meetings, going back to the early 2000s, and is grateful the late champion trainer would always make time to discuss all things racing with him.

Around ten years ago, once he'd finished his studies, he worked for Bart Cummings where he had his hands on the likes of So You Think, Roman Emperor and Faint Perfume.

"It wasn't just a job, I had a plan in place to pick his brain and everyone around him, including the vets," Borham said.

"To try to get as much out of it as possible instead of just going through the motions of working in a big stable."

It was working among the large Sydney stables that confirmed to Borham that when he became a trainer it would be on a much more moderate scale.

He lost 35kg in his first year of training and rides trackwork for himself and others, he's adamant that being hands-on is not only good for the horses but for himself as well.

He counts former administrator, breeder and ex-bookmaker Bruce McHugh as a mentor following time spent in Northern NSW educating and pre-training horses for him prior to settling at Queanbeyan 11 months ago via six months at Kembla Grange.

"It’s been a conscious decision not to build quickly because I believe you have to get all of your ducks in a row first,’’ he said.

“I've seen too many people either go bust or not do justice to the horses in their care by going all in too quickly. 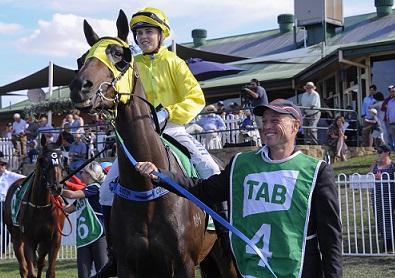 "Bruce constantly advises me that I've got to promote myself more and move less talented horses on quickly.

"He’s right, of course, but I feel it has been important for me to pay my dues as a trainer and go through this process. Guy [Walter] always said ‘you learn more from the slow and troubled ones, even though watching them run is often not good for the ego’.”

There are over 950 licensed trainers in New South Wales. A lot of them only train small teams.

Borham can count the number of horses on his books on two hands.

Aside from a lightly raced Arlington mare owned by Grant Bloodstock named Vertex, a Showcase winner who has also recorded three Highway placings, all Borham’s previous horses had been tried extensively and came to him requiring some kind of special attention.

His numbers will grow in time but only to a level he sees as manageable so he can remain hands-on.

It might sound crazy to turn your back on a high paying career to what's seen as a thankless task as a racehorse trainer.

And it might be crazy but Borham, an idealist at heart, hasn’t done it lightly.

"If you worked in this profession solely for a pay packet or the potential of making your fortune you wouldn’t be a happy person," he said.

"I'm in the enviable position that I choose to be a trainer. I love working with horses and see it as a privilege.

“I'm lucky I've been in a position where I can support myself and keep going while stopping to smell the roses and taking time to build.

"I have a few young horses coming through and would like to take on several more and look after more owners who want to be part of this exciting and sometimes fruitful game. As with developing a horse, patience is the key."