It’s been a draining month or so for trainer Todd Blowes but he’s happy to report stable star Noble Boy is in much better shape than he is ahead of Saturday’s $500,000 Newhaven Park Country Championships Final (1400m). 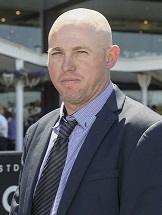 Blowes has been plucked from the quiet life training a small team at Queanbeyan and thrust into the spotlight of Day 1 of The Championships thanks to his promising galloper’s rise to prominence.

“You don’t realise it does take a bit of a toll on you,’’ Blowes said.

“After the pressure of missing out at Goulburn we were forced to go up to Muswellbrook for the last throw at the stumps.

“And just knowing it was top two or nothing at Muswellbrook. Once we’d qualified it was a massive relief and the rest from there is just a bonus.’’

Noble Boy – known around the stables as ‘Hoff’ – has been favourite for the Country Championships since markets opened.

He’s won five from six and after the disappointment of defeat in the Goulburn Qualifier – a loss put down largely to the firm ground – he reasserted his place as the horse to beat with a typically dominant performance in the Wild Card at Muswellbrook.

In a way the Goulburn experience was an important leveller for Blowes and while he’ll again feel the pressure that comes with expectation he’s excited about finally getting to Randwick on Saturday.

“Everywhere you go everyone’s telling you he’ll win but it is still got to be done,’’ he said.

“I’ll do my normal thing, concentrate on the horse and make sure he’s ready to go.

“It’s massive, not only having a runner on the big day, the satisfaction of preparing the horse and picking this race out a long time ago.

“It’s a sense of relief to see him go out there and get what we set out to do done. But it’s not a matter of simply going out there and winning, it’s still a horse race and a lot of things can go wrong.

“After the race it’ll be a time to reflect on what we’ve done and it’s just an achievement getting him there.’’

Since the Muswellbrook win Blowes said Noble Boy has hardly turned a hair and he’ll have his final gallop on Tuesday before attempting to join Artlee, Clearly Innocent, Free Standing and Victorem as Country Champion.

“It didn’t take too much out of him at all, he pulled up super from it,’’ Blowes said.

“He’s just a real racehorse. He goes out and does his work and comes home, puts his head in the feed bin and is just a happy horse.’’

Blowes said as far as how the race pans out for Noble Boy he’s not going to worry about that too much – his concern is the horse turning up at his best – the rest is up to champion jockey Hugh Bowman who is unbeaten in two rides on the gelding.

“There’ll definitely be a bit of give in the track which will suit him and with Hughie on board it takes a bit of pressure off,’’ he said.

“No instructions needed, I just let him go out and do his thing.

"When you look at it on paper we’ve got more going for us than against us. With Hughie on the barrier doesn’t come into it quite as much, he’ll work something out.’’

All the entries, form and replays for Day 1 of The Championships at Royal Randwick