Trainer Mitchell Beer reckons he has at least one serious chance plus a real dark horse among his likely five runners in Saturday’s $150,000 South East Country Championships Qualifier (1400m) at Albury. 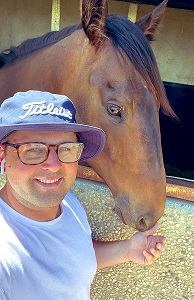 It’ll be the popular trainer’s first foray into the Country Championships – he moved from Victoria to Albury in late 2018 but after the cut-off point for the 2019 series – and he’s taken to the concept with all the enthusiasm we’ve come to expect.

“The Country Championships is your pinnacle and it’s one of the big drawcards for having a younger, lightly raced horse, race in country NSW,’’ he said.

“It’s great to be here at Albury, this is our first year at the Championships, so it’s been exciting.

“It’s been on our minds for the last 12 months and I feel like we have a strong enough hand in it if they are good enough.’’

To say Beer has embraced life in Albury would be an understatement.

The 31-year-old has thrown himself into the country lifestyle and feels like a local – evidenced in no small part by his willingness to put racing on hold to organise getting feed and other supplies out to bushfire affected participants at the height of the crisis.

Albury hosts the Country Championships meeting for the third time and Beer said it’s a huge opportunity for the border city from so many perspectives.

“It’s a great day of racing, fantastic prizemoney, and we’re going to have about 12 runners on the day,’’ he said.

“It’s great for the club to have the opportunity and for people to come to Albury. We get to not only showcase our horses, but our club and our community.

“It’s a community I haven’t been a part of for all that long but I’ve really got behind it. The whole community has embraced me since I’ve come here and vice versa.’’

So can he win one or both of the two spots up for grabs in the $500,000 Newhaven Park Country Championships Final (1400m) at Royal Randwick on April 4?

Beer’s in-form mare Sky Call, to be ridden by Teo Nugent, has some form around News Girl from a Caulfield race back on Boxing Day and has since announced herself as the stable’s leading chance on Saturday with successive Victorian city placings.

“It’s a big difference between News Girl’s city form and our city form but I think if you can be competing close to Benchmark 70 level in town that’s good enough,’’ he said.

“That’s been proven in the past and I think Sky Call certainly heads my runners.

While he has Sky Call on top of the pile, Beer says each of his other quartet have the credentials to put themselves somewhere in the finish under the right circumstances.

Maid In Milan runs second at Albury on February 4

He said Logan River, who was his major hope at the start of this preparation, and Damselfly’s Kept will be ridden to their strengths on the speed on Saturday, the lightly raced Cardinet shouldn't be underestimated while he’s adamant Maid In Milan could be the surprise packet.

After a couple of head scratchers, the five-year-old mare really impressed Beer with her fast finishing second over 1175m at Albury on February 4, off a seven week bresk, under 60kg and is warming to her chances.

“I went back through her form because I hadn’t had her for that long and she likes to be very fresh,’’ he said.

“She was a long way back here the other day over 1175m, it was a massive run. I think she’s a real sneaky.

“She’ll be back off them and at big odds she’s the one I could see causing an upset.’’

All the entries, form and replays for Saturday's Country Championships meeting at Albury