It’s going to take a perfect ride and a bit of luck but Wagga trainer Scott Spackman isn’t giving up on O’ So Hazy becoming the first horse to win two Country Championships Qualifiers at Albury on Saturday.

The five-year-old’s chances were dealt a blow by drawing what will be the outside alley in the 16 horse field while stablemate Takookacod also fared poorly with a wide alley, though Spackman isn’t too worried about her gate. 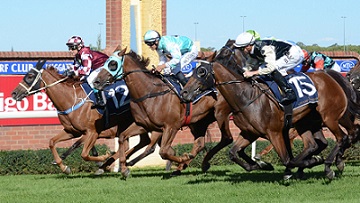 So far in the short history of the Country Championships no horse has managed to win two Qualifiers – both Pumpkin Pie and Caerless Choice have a first and a second in their respective regions.

Spackman said he’ll be spending some time to work out how jockey Wendy Peel might be able to give O’ So Hazy her best chance.

“I’m going to sit down and try to map out some sort of a plan for young Wendy and hopefully she can do it,’’ he said.

“Her preparation hasn’t been as good as it was last year. We left her in the paddock a bit longer after the Kosciuszko preparation and I would have liked to have another couple of weeks.

“But I’m happy to have both horses in there, they are genuinely live chances.’’

O’ So Hazy has led all the way to three of her five career wins and sat handy in the other two so she does have an established pattern.

Spackman said he’s loath to tinker with that pattern too much but believes it’s going to be a big ask to cross from the outside and lead a competitive field in the $150,000 SDRA Country Championships Qualifier (1400m) off a three month break.

“It’s never been my intention to lead with her it’s just circumstances that have prevailed, she’s an on speed runner but I’ve never wanted to lead,’’ he said.

“She had a nice trial the other day and has come on from the trial. If it does go a bit pear shaped we can always go to Muswellbrook and have another go.’’

Win, lose or draw Spackman said the mare has given himself and her owners an amazing past 12 months.

From winning the Qualifier last year to running third in the Final at $41 and being a part of the inaugural The Kosciuszko – they are money can’t buy experiences.

“We’ve had some highlihgts, you’d go a lifetime to do what she’s done for me,’’ he said.

“Where she’s taken us to, the Kosciuszko and the Country Championships. Running third last year was just like winning it. Gosh she’s been a good little mare.’’

Both O’ So Hazy and Takookacod are on the $11 line with TAB in Saturday’s Qualifier and Spackman believes Takookacod is more than capable of swooping in late.

O' So Hazy's trial at Albury on February 8

Spackman threw the four-year-old into the Group 2 Breeders’ Classic (1200m) at Warwick Farm first-up after a wind operation and a bout of colic and was beaten four lengths by Champagne Cuddles.

“She gets back a bit and she’s better ridden that way too, to have the last crack at them,’’ Spackman said.

“She’s not far off Listed company, she always has been but she’s had troubles along the way.

“She’s probably improved a couple of lengths, that’s probably all she has to do. She has to be in her rhythm and she can show a good turn of foot when she gets in that rhythm.’’

Spackman is rewarding apprentice Josh Richards, who is a qualified builder, with the ride on Takookacod and says he’s a young rider with a big future.

First and second from the Albury Qualifier earn a spot in the $500,000 Newhaven Park Country Championships Final (1400m) at Royal Randwick on April 6.