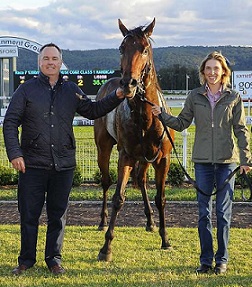 Tim’s Principal was Gask’s first runner when he returned to Australia after over a decade training in the UK and Angland rode the gelding to a close second at Scone in May last year then won on the horse at Gosford a couple of weeks later.

It was announced earlier this week that Angland is a quadriplegic due to injuries from a fall in Hong Kong late last year and the Scone trainer says it's a tragic outcome.

“Tye and Chad Lever rode our first winners back and Tye was terrific with us,’’ Gask said.

“I’ve been through it in different circumstances in England with a guy who used to ride for us, Freddy Tylicki, who had a similar fall and became a paraplegic.

“It’s always in people’s minds the dangers of what these guys do. You don’t exactly know how best to approach it, but I know he has no shortage of support.

“The amazing thing I find about these guys, and Freddy epitomised it, was how positive in general they are and they have such great outlooks and positive attitudes and that goes a long way to helping.’’

With no disrespect to jockey Chad Lever, who will be in the saddle at Tamworth, Gask said he would have loved to be able to ask Angland to ride Tim’s Principal this weekend.

Lever was on board the five-year-old, who is an $11 chance on Sunday and $51 in TAB’s all-in market for the Final, when he resumed with an eye-catching second at Newcastle last month.

He clocked 33.41 for his last 600m (Punter's Intelligence) in the 1200m sprint, easily the best of the race, and has an imposing second-up record.

“I thought his run was excellent off what was a strongly run race,’’ Gask said.

“I’ve always thought he has more improvement in him from a maturity point of view despite his age. If we can get him to settle and relax I’m convinced he’ll run 1400m no worries.’’

Gask says Tim’s Principal’s weakness is his habit of over racing which is why he was ridden so cold at Newcastle and why he recognises 1400m as a small query.

He drops 4kg into the $150,000 HNWRA Country Championships Qualifier (1400m) and that’s a major positive for his chances of finishing in the top two.

“We’re well in against a large number of the field if we were running under handicap conditions,’’ he said.

“He’ll get back a little bit, which is not ideal at Tamworth, but I think we will be back with a couple of the fancied runners anyway.’’

Obviously Tim’s Principal is Gask’s first Country Championships runner and it’s a concept he’s been fascinated by since he settled in Scone a year ago.

He’s also heard a lot of talk about it very close to home – his next door neighbour is one of the owners of Tamworth aspirant Moobi while Justin Drake, who lives behind Gask, part-owns Goulburn Qualifier winner Al Mah Haha.

“I didn’t really know much about it, if I’m honest, when I came back but everyone you talk to around this area the first thing they ask is 'do you have a Country Championships horse',’’ he said.

“Funny enough I probably didn’t consider it enough when I first came back, there was probably a horse or two I should have considered more.

“Getting my head around the conditions and so forth, the sort of horse you need, is something I should have given more thought to not knowing how big it was.’’

First and second from the Tamworth Qualifier earn a spot in the $500,000 Newhaven Park Country Championships Final (1400m) at Royal Randwick on April 6.