Aiden's Country Championships Hope Out To Give 'Em Hell

It may seem unorthodox to resume at 1205m then drop to 1100m as the preparation for a 1400m race but trainer Aiden St Vincent says it’s the right move for promising mare Hellenism to springboard into the Country Championships. 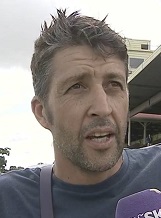 On what she's shown to date the lightly raced four-year-old, a winner of two from four, would be one of the leading contenders for the NRRA Qualifier (1400m) at Coffs Harbour on February 15.

St Vincent said he chose the Sky Racing Active Highway (1100m) at Randwick on Saturday for Hellenism to ensure her final start before the Championships is on a big, roomy track.

“She can get in a bit of bother in races so I wanted to put her on a track where she can find her feet and get comfortable and get a genuinely run race,’’ he said.

“I wanted to give her the chance to measure up in a Highway. A big track and 1100m, small field, I really think it is going to play into her hands.’’

Hellenism, pressing for Highway favouritism at $3.20 with TAB, resumed with a remarkable win on her home track at Coffs Harbour, her first start for St Vincent having formerly been trained by Brett Dodson, coming from last over the 1205m to win edging away.

It was a win St Vincent described as ‘a little bit arrogant’ and certainly not surprising.

The mare has led in two of her starts and settled at the back in the other two and St Vincent said he’ll instruct jockey Tim Clark to do the latter on Saturday.

“I see him only having one option and that's to go back,’’ he said.

“The only reason he'll be in front of a few horses is if something misses the start. I don't want to see him try to roll forward and be deep.

“She was last on the corner the other day when she won so I can't see why at the top of the Randwick straight we'll be doing much different. She needs to have a look at them and find a path through them.

“If you stir her up she can be a little hard to handle, you can't press the accelerator and back off. You have to be a bit careful and that's why she got run over at Grafton (two starts ago).’’

St Vincent clearly has a bit of a rap on Hellenism, saying she reminds him of his father Paul’s former top sprinter The Jackal who won 15 races including successive Ramornie Handicaps.

Of course the mare has a way to go yet but he said Hellenism has similar traits.

“She can over race and get a bit keen but if you can switch her off and ride her cold she can do what he used to do,’’ he said.

“It's the closest thing I've put a saddle on to be like him. It's my measuring stick anyway, if I can get one to go close to be as good as him.’’

The field for the opening $150,000 heat of the 2020 Country Championships at Coffs Harbour will start to come together in the next couple of weeks.

While Saturday is only Hellenism’s fifth race start, St Vincent believes so much in her ability he thinks this year will be her only shot at the rich country series.

“I don't think she will be a Class 5 horse next year, you'd think she would progress through the grades by then,’’ he said.

“If the horse is fit and well you don't put them in the paddock for one race. I haven't seen what Matt Dunn's got or Stephen Lee and whether they have anything to make it interesting.’’