Fledgling trainer Darrell Burnet has gone close twice with the only horse he has started so far, but at Albury on Thursday he hopes a new acquisition can kick-start his training career.

The 24-year-old will start recent purchase Onya Marks for the first time under his care in the final race.

The mare will start from the outside barrier in the Benchmark 58 (1175m) with Albury apprentice jockey Danielle Scott aboard. 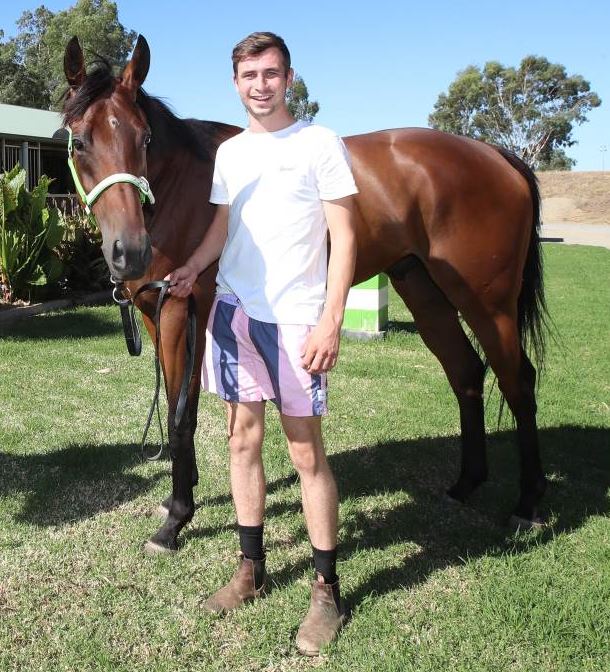 Darrell Burnet with one of his horses. Image by Les Smith

Burnet has started training a few horses in his own names after commencing his racing career in Victoria before relocating to Wagga to study equine science at Charles Sturt University.

It has been in the breaking-in and pre-training of thoroughbreds that Burnet has been in demand where he works long hours educating between 16 to 20 horses a day at the present time.

Throw in a couple of racehorses to train and Burnet is kept busy from well before dawn to late in the afternoon.

“Most of the time I’m getting horses ready for other trainers. Having a couple of my own horses to train is a different challenge,” he said.

Burnet’s first horse to the track was Something Fancy which finished second at her only two starts in June.

Onya Marks will be his next starter and he is keen to see how she shapes up after only a brief time under his training. The mare was purchased after she won at Wagga on August 9 – her third victory from 15 starts.

“She won two of her first five starts at Morphettville then last start she won at Wagga after having five weeks between starts,” he said.

“She is a few weeks between starts again. I’m not expecting too much and just hoping she can run a nice race for the new owners.”

Burnet said he has adopted a different training style with Onya Marks keeping her away from the nearby Wagga racetrack and opting for exercise along some bush tracks.

“I have only taken her to the track once so no hard galloping. I have taken a fresh approach with her and I’m keen to see how she goes,” he added.

Burnet’s breaking-in and pre-training business has helped him establish himself in Wagga with a “new home and nice business.” The young trainer is keen to eventually train more horses outside of his main business and there would be no better advertisement than a winner with his second starter.

His partner Brittany Heywood is one of the part-owners of Onya Marks who had four different trainers before she joined Burnet. The trainer knew a little of Onya Marks through jockey Chris Caserta who rode her in her two Adelaide victories.

“I have followed her career a bit and when she was able to be purchased we decided to buy,” he said. “Before she won at Wagga, she ran last so hopefully keeping her fresh works best for her.

“She is only lightly framed and a small, petite mare so the three-kilogram claim for Danielle will help.”

Three last start winners, including two which broke through for their maiden victories at Albury, are also rated among the main chances.

Scalded and Bautista won easily at the previous Albury meeting, while Pacific Tycoon was successful at Narrandera. Albury is currently rated a Soft 6.