Wilkes Hoping A Star Is Born In Country Championships Qualifier

Taree trainer Wayne Wilkes knows what it takes to make it to Randwick for the Newhaven Park Country Championships Final and he’s certain lightly raced mare Monica’s Star is set run right up to the potential she's showing. 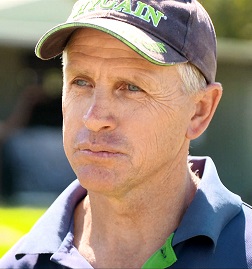 The four-year-old is one of likely three runners for the father and son training partnership of Wayne and Joel Wilkes in Sunday’s $150,000 Mid North Coast Qualifier (1400m) on their home track, alongside the lightly raced Chase My Crown and Dunoon.

Monica’s Star appeared at last year’s Country Championships meeting at Taree, running third in a Class 1, and after she scored at Port Macquarie third-up in April over 1500m Wilkes started the planning process to the Qualifier.

“We’ve just been ticking her over steadily,’’ Wilkes said.

“We had an opinion of her when she ran in that Class 1, after she ran second at her first race start I thought she could be a handy filly.”

Wilkes won the Mid North Coast Qualifier in 2019 with Lucciola Belle who then went on to run second to Noble Boy in the $500,000 Final.

With only nine starts under her belt Monica’s Star has been a little more sparingly raced than that grey mare was leading into the Championships but she’s followed a fairly similar pattern.

She wound up her preparation by performing well in Highway races and resumed with a gutsy fourth in the Queen Of The North (1200m), a race Lucciola Belle won in her year, at Port Macquarie last month.

“She was three wide all the way and she kept fighting all the way to the line,’’ Wilkes said.

“She’s come through it well, we normally give her a few weeks between runs so it has worked out perfectly.

“She’s a very versatile horse. She can handle all track conditions and she can race up front and behind.

“I don’t think the race is as strong as previous years but I think that is across the board. There doesn’t look to be a lot of standouts, there are some promising horses around though.”

Monica’s Star, to be ridden on Sunday by Louise Day, is a $51 chance in TAB’s all-in market on the Newhaven Park Country Championships Final.

Wilkes said he’d be surprised if stablemates Chase My Crown and maiden winner Dunoon don’t develop into realistic chances in the 2022 series but their efforts at Coffs Harbour last weekend warrant their inclusion despite racing well out of their grade.

Chase My Crown, a filly that holds nominations for the Group 1 Surround Stakes and Australian Oaks in an indication of Wilkes’ view of her promise, chased the smart Parksville home over 1200m at Coffs.

“Her last 600m was equal to or a fraction better than the winner and she was doing a few things wrong, just little things,’’ he said.

“She has a hell of a lot of improvement in her and they put a few lengths on the third horse.

“I think we’ll see the best of her as a four-year-old. I haven’t tried her at 1400m yet but I’d be surprised if she doesn’t get out over a bit of ground.”

The Wilkes partnership has been operational for around six months now and Wayne said having his 27-year-old son Joel front and centre is a big boost.

Joel has been part of the stable since he left school and spent a year working at Godolphin in the John O’Shea period but was foreman for his father for a couple of years before the partnership came into effect.

“It’s good to have an extra set of eyes run over the horse and talk to owners,’’ Wilkes said.

“We can aim at the 20 to 30-year-olds who want to get into the racing industry, Joel can communicate on the same level as them.”

All the fields, form and replays for Sunday's Country Championships meeting at Taree