Racing NSW has been informed of the passing of legendary Western Districts jockey Ray ‘Spike’ Jones who passed away today aged 77.

Jones’s love of horses developed when he began riding a donkey backward, making it buck to simulate what it would be like to ride a rough horse. 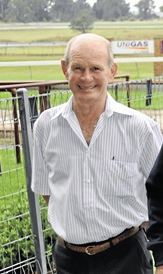 Jones then made it two from two when he scored at Bathurst’s Towac Park in his first attempt at the track.

“I’ve always said if a horse can win a 1400-metre race in Orange they can win a race in Sydney. I loved the track.”

Jones went on to win 14 premierships, rode four winners on the one day on 14 different occasions and accumulated a total of 1448 winners.

Mr Jones also sat on the sideline through suspension 14 times while also surviving the horrors of falling off a racehorse 14 times. Lucky or unlucky, 14 was Jones’s magic number.”