The nation’s restrictions haven’t impacted on tiny Wantabadgery near as seriously as Captain Moonlight’s fatal bushranger raid in 1879, and the post office closure in 1966 as veteran farmer and trainer Rodger Waters inspires his modest home cheer squad for a TAB Highway at Royal Randwick on Saturday with outsider Kaipaki.

If the bargain Victorian discard can upset talents with series heavyweight Brett Cavanough and rising Cody Morgan, the decibels back home will rival when Rodger won four Tumbarumba Cups over many years as a local. A treasured race for its century-plus history. 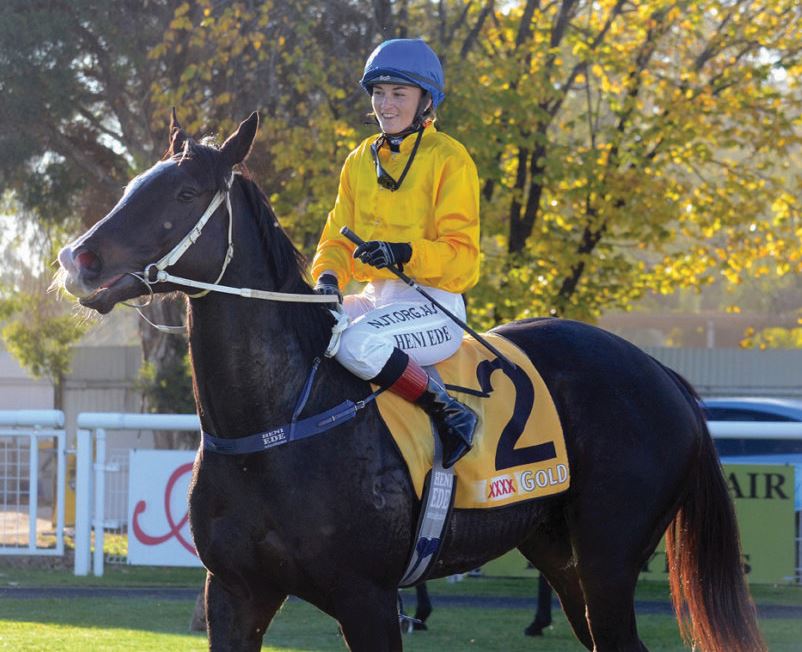 Kaipaki and Heni Ede after scoring at Wagga. Image by Tumut & Adelong Times

If he’s largely ignored, significantly the gelding is a noted wet tracker and leader. In mid-2018, then a three-year-old, Kaipaki was placed on debut over 1000m at Sandown before eventually winning a Sale maiden.

After subsequent failures, he was sacked by the Ellerton and Zahra stable and purchased by Rodger and friends to win twice at Wagga.

With a small team racing amidst historic Man from Snowy River and Ned Kelly territory, Waters’s seasons have been highly productive in Riverina Cups.

The latest success in 2016 at Tumbarumba with Exchancellor, intriguingly a $325,000 Exceed and Excel yearling, sacked by the Waterhouse stable and eventually winning nine races for Waters back in Riverina regional grade.

With an obvious eye for a bargain, Rodger has long been established in the picturesque rural community on the back road between Wagga and Gundagai. He maintains two spacious training tracks on the family farm.

“I’ve got six in work, family’s been out here for 30 years,” Rodger explained. “It’s the ideal environment to work horses on our own tracks, paddock space and company.

"We run sheep as well, not as many in previous years, just enough to handle. I’ve got a circle track and another 1700m with a steep incline.

“This is a nice gelding and the timing was right to come off his Wagga win if he’s up to them in a strong race.

“He ran decent time, he’ll get through the ground and the light weight is in our favour if the track worsens. He’s a big strong fella and he can race on-pace.

“A country Highway is probably his limit, he’s not city grade at five and the starts he’s had. We’d planned to come up a couple of weeks back but it didn’t work out.

“That Pinnacle Prince ($2 favourite) is a real smart horse but I notice he does get back. But while we’re eligible, you’ve got to go for that level of prizemoney; compared to back home where we’d get a lot more weight.”

Rodger and the seniors of a population of around 300 are acutely educated on the folklore of the 1879 bushranger’s siege at Wantabadgery Station where later two of the gang and a police offer were killed in a shootout. Captain Moonlight was captured and subsequently hanged in Darlinghurst jail.

In Saturday’s far less pressured circumstances, Kaipaki won’t be 'strung up' in heavy going. He may well lead, vital in the conditions.

“You know they captured Captain Moonlight right where our farm is now. Fox TV and Mike Munro came down and did a documentary with that bushranger’s series and Ned Kelly.

“They excavated where the old farmhouse was and the shoot out. Found hundreds of bullets and casings in the ground. I watched them - amazing.”

Meanwhile, if Kaipaki’s odds are lengthy against a rising star in Brett Cavanough’s Pinnacle Prince, a stark reminder for punters is numerous favourites of late floundering in extremely heavy going and likely similar again.

Exciting Pinnacle Prince logically is short odds again after a tremendous Highway win from near last in soft going. Reinforced by his previous second to subsequent The Kosciuszko winner It’s Me.

Pinnacle Prince has won twice on the worst side of soft. He goes up 2kg after James McDonald rode him a kilo over and predicted bigger occasions. Jason Collett takes over on Saturday.

Cody Morgan’s former Hayes-Dabernig sprinter Moyassar ($9.50) doesn’t have that upside but he’s been dominant in a recent Armidale double. And after being “nommed” but not accepting for a recent Highway, this appears a target race.

Headquarters is presently a Soft 6 in overcast weather.