In the frame are four-year-old gelding Editors, trained by Ross Stitt, and five-year-old mare Valbeata from the Bob Milligan stable. Editors is resuming from a spell for jockey Matthew McGuren whereas the Milligan stable has opted to claim 3kg with comeback (from injury) apprentice jockey Kyle Wilson-Taylor aboard. 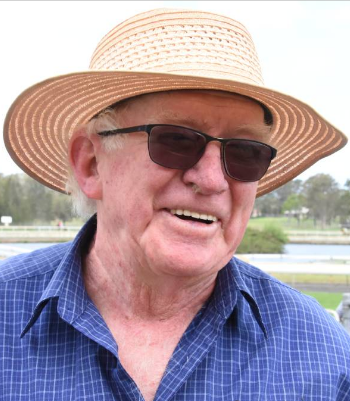 Ross Stitt [pictured left; image by Manning River Times] earlier had the qualifying heat of the Country Championships in mind as an aspiration for his galloper but put the cue in the rack when the heat at Port Macquarie Racecourse was set at 1200m, not like all the other qualifiers in country associations being over 1400m.

After Sunday’s race, he will set Editors for the $35,000 Inverell Cup over 1400m on January 1. He has a lot of faith in the ability of the gelding and work since a spell has pleased him: “Very, very good; he looks really well.”

Former stable jockey, Taree’s Scott Thurlow, has been involved in two jump outs with Editors and according to Stitt “he has been impressed with the work.”

The Street Cry (Ire) gelding has had 16 starts for four wins and three placings, three wins at the track, one at the distance. Editors won over 1400m at Taree on September 3 before going out for a spell on a sixth to Newcastle’s Sepae over 1250m.

McGuren has picked up another two rides for Stitt, they being Fair Dinkum and Lock And Launch, both given an each-way hope in other races. Valbeata was most impressive with a narrow defeat by Newcastle trainer Kris Lees’s Silver Melody when resuming from a long spell on December 3 at Taree and looked in splendid order.

“She hit a flat spot about 200m out (1000m race) probably due to her big weight but she knuckled down and is now looking for further,” Milligan’s son, Glen, said. “If she wins she will be probably be looking at races around open class but if not she could line up in the Harrington Cup (at Taree January 2),” he said.

“She is solid but not overly big and weight can crucify her. We haven’t rushed her and think she will be in for a good campaign.”

Port Macquarie trainer Tas Morton believes his anchor bet could be four-year-old gelding Better Not Fly in the Summer Beach Party 2 Jan Class 3 Handicap over 1250m, the horse being an impressive winner in a barrier trial at Taree at its last meeting.

Second was Arise Augustus, trained at Tuncurry by Terry Evans, with a large gap to the third horse. Better Not Fly has had eight starts for three wins and a third, one of the wins at this track and two at the distance.

It could go to Sydney for a Highway race next Saturday, its target being the Country Championships next year, all going well. Morton has also accepted Better Not Fly for the Summer Cup and it is in the mix should it start in that race.

Taree trainer Michael Byers has had six wins in a row with a trio of gallopers in the past three weeks and another resuming galloper could give him seven in a row in the Harrington Cup 2 Jan Benchmark 58 Handicap over 1000m.

Music Magic, to be ridden by Wendy Peel, with Byers saying it has come back “looking a treat” and has galloped well on the track.