Trainer Confident Polarity Will Repeat The Dose At Wagga

There are no guarantees in racing, but if Supreme Polarity runs true to form he will win The Ted Ryder Cup Prelude at Wagga Wagga on Tuesday.

Each time Supreme Polarity ($2.80 on TAB fixed odds) has won a race he has backed it up at his next start with another win and that is the same form line he will carry into the feature race. 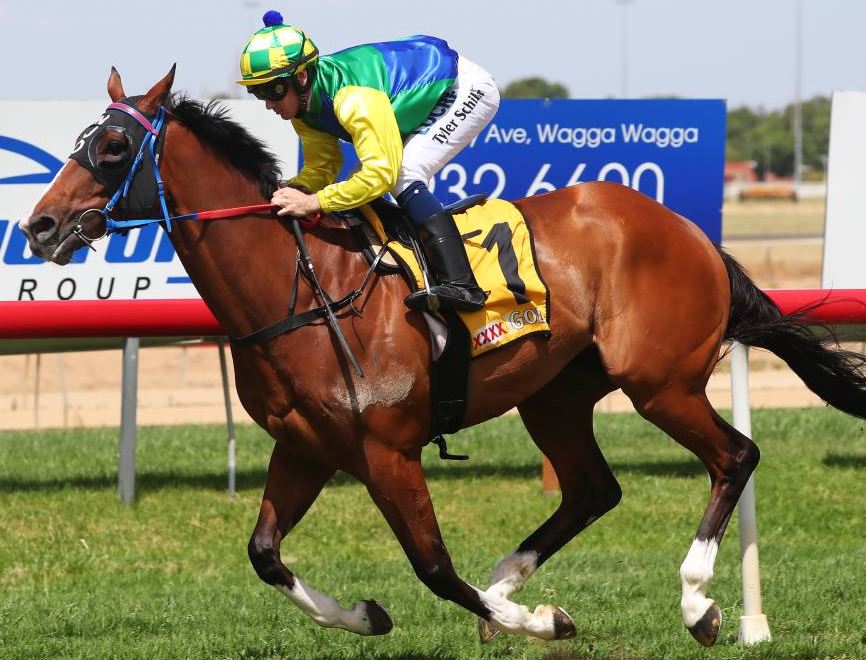 Supreme Polarity (Tyler Schiller) will be hard to beat at Wagga Wagga on Tuesday. Image by Emma Hillier

If Supreme Polarity, a huge winner at Wagga Wagga last start with 59.5 kilograms in a Benchmark 66 over 1600 metres, can do the same again with two kilograms less he will be one of the prime contenders for the Ted Ryder Cup on Christmas Eve.

“It was his fourth run back from a spell last time and he won well and is just as good now,” Olive said. “He hasn’t gone backwards so he should be right in the finish.”

Supreme Polarity won consecutive races in South Australia in February and March of 2017 and then took wins at his first two starts for Olive at Canberra in August and September of last year.

The six-year-old won by more than four lengths at Wagga Wagga with apprentice jockey Tyler Schiller in the saddle last month and is again likely to attempt an all-the-way victory.

Supreme Polarity has shown his class running third in the South East Country Championships qualifier earlier this year, while he was also placed behind Lady Mironton in the Stan Sadleir at Wagga on November 1.

Lady Mironton ($7.50) is Tuesday’s race top weight with 61 kilograms, but with temperatures expected to hit 40 degrees she remains in some doubt.

Trainer Wayne Carroll wants to also run Lady Mironton in the Ted Ryder Cup, but may take a cautious approach in the prelude.

“It’s a big ask with that weight on a hot day,” Carroll said. “If she doesn’t run she will start in the Ted Ryder Cup then have a break and come back for the major cup carnivals around her.”

Wodonga trainer Craig Widdison will start Toorak Cowboy ($15) and Wyangle ($3.50) with the latter coming off a last start sixth beaten only two lengths in the Wodonga Cup.

Wyangle is ready to win again after having no luck behind his stablemate, Willi Willi, in the Wodonga Cup, according to his trainer.

“The horse is flying and should have won a couple of races so hopefully on Tuesday he can get the job done,” Widdison said.

It’s Christmas did her early racing on the provincials and returns from a break for Widdison for her second campaign with him.