Track Flash Primed For A Shot At Golden Triangle history

Track Flash, trained at Moree by Peter Sinclair, became just the third horse in Golden Triangle history to win a hat-trick of Boolooroo Cups when beating Another Plan and Free Ticket.

And while Track Flash joins Mulgate and Royal Toga as a three-peater, Mulgate still reigns supreme as arguably the best picnicker seen on the Golden Triangle. 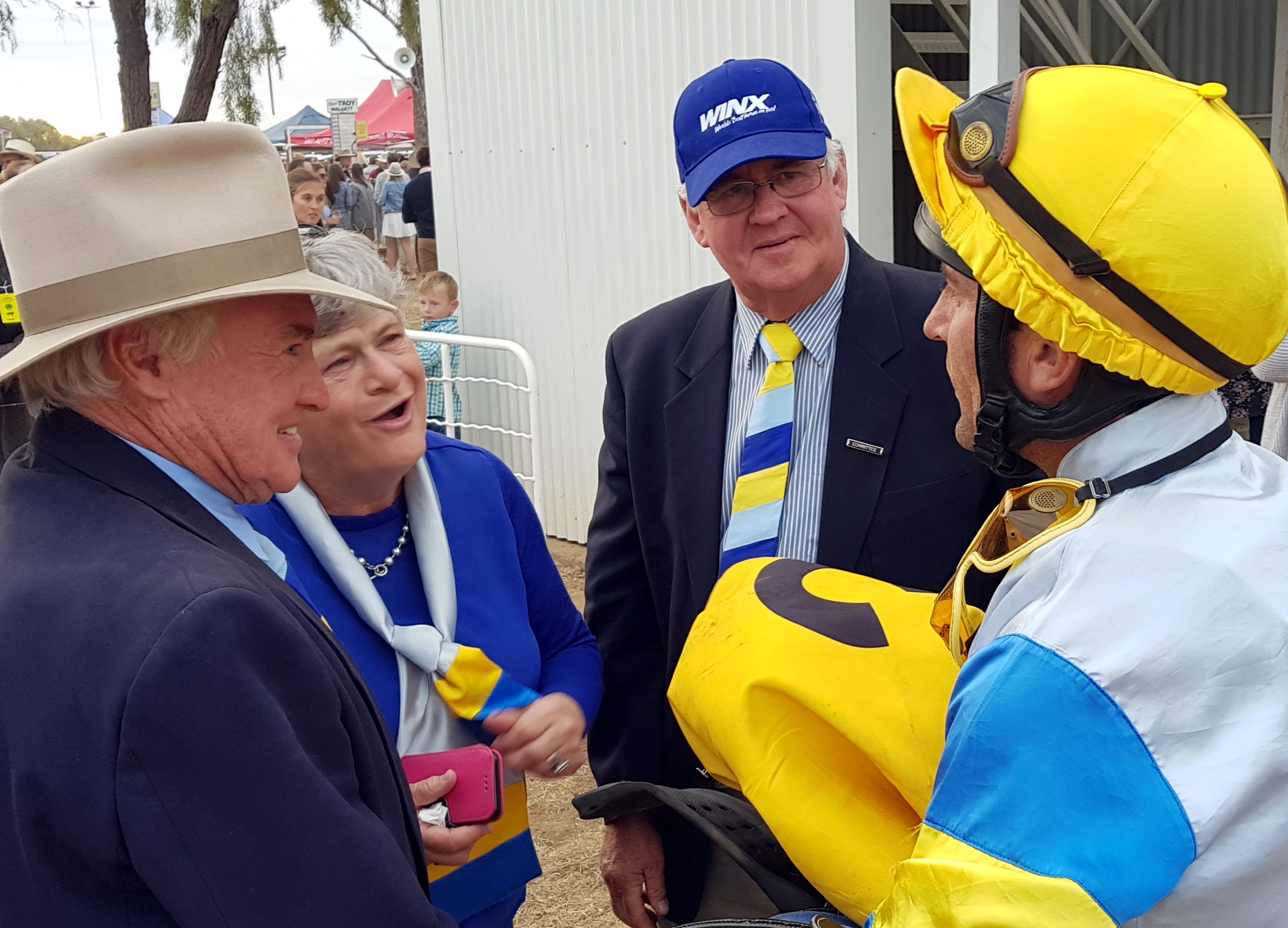 Mulgate, trained by the legendary Eric Jurd and owned by sisters Geraldene Farrar and Anne Livingston, put together a quartet of Boolooroo Cups from 1959 through to 1962 as well as four Mallawa Cups in 1958, 1960, 1961 and 1962.

Sinclair extended his Boolooroo Cup-winning run to 13 since 1995 – the last eight in succession.

Track Flash is one of seven final acceptors for Saturday’s 1400m Mallawa Cup and has been given 68.5kg – half-a-kilogram less than stablemate Oh Why.

“Both horses will start,” Sinclair said. “Track Flash has done well since winning at Moree and Oh Why has been a model of consistency this preparation and should handle the dirt.”

Ashley Boyd, who replaced the injured Rick Blewitt at Moree, has retained the ride on Track Flash and Steve Kehoe jumps on Oh Why.

“It won’t be easy this year, with the likes of Rusty Motorbike engaged,” Sinclair said.

Consistent gelding Free Billy, which finished in the minor money in the Inverell, Glen Innes and Deepwater Cups earlier this year, resumed with a barnstorming win at Moree.

“It was a great win and it’s good to see Free Billy back in winning form. His work leading up to Moree was very good – there isn’t a horse in the stable that can go with him,” Sinclair said.

Sinclair chases his fifth Mallawa Cup on Saturday after wins with General Relativity (2011), Saint Lenny (2013), Dungiven (2015) and Track Flash last year. Surprisingly, he has only one Mallawa Bracelet on the mantelpiece – Big Jack in 2004.

Sinclair is also just the sixth trainer to win all three cups on the Golden Triangle in the one season, a feat he achieved in 2014 with Tapakeg.

“Tapakeg was much better than picnic class and, really, had he raced a bit better in his couple of runs before the picnics that year he probably would not have started on the circuit,” Peter said.

Last year Track Flash went close to bagging the coveted triple-crown when winning at Moree and Mallawa. He then finished third behind Geoff O’Brien’s Rena’s Lad in the Talmoi Cup after getting a long way back in the early stages.

Mulgate’s historic treble in 1961 is the stuff of legend and the resilient bush gelding also won four Mallawa Cups between 1958 and 1962.

Incredibly, the gelding could very well have made it five Mallawa Cups in succession if not for a luckless second to Theleme in 1959 – and that was after winning the Mallawa Bracelet just a few races earlier.

Mulgate made his final appearance at Mallawa in 1963, when third in the cup behind Sarah Bay and Ratanada. He also won the Talmoi Cup in 1961, the year he established Golden Triangle history by becoming the first horse to win all three cups.

Passing Trade, trained by Harold ‘Bubby’ Wann and owned in partnership by Henry Moses and Percy Stirton, is regarded as the only horse to seriously threaten Mulgate’s crown.

In 1970, Passing Trade became the second triple-cup winner and in 1973 returned for an encore trifecta – the only horse in Golden Triangle history to win the triple-crown twice.

Anne and Geraldene Moore purchased Mulgate as a young horse through their friendship with Jack Sullivan. The Moree newsagent was very good friends with champion Sydney jockey Jack Thompson, who suggested the sisters buy Mulgate.

“He was a wishy-washy young horse when we first got him, and nobody liked him very much,” Anne recalled.

From stark beginnings, Mulgate went on to win 15 races from just 31 starts. “It was unbelievable to think that we could have a horse like Mulgate,” Anne said.

“He was a great weight-carrier but he wasn’t an overly big horse ... a very solid horse, though, and very strong.”

Sections of this article are extracts from The Triangle, a book written about the history of bush racing in the Moree district that was published to raise money for Moree and District Historical Society.

The Triangle will be for sale at Mallawa picnic races on Saturday, June 8.