The Lion Set To Roar Again At Tamworth (Tuesday)

Michelle Fleming believes The Lion ($3.20 favourite on TAB fixed odds) is “spot on” when he runs in Tuesday’s $22,000 Cellarbrations Open Handicap (1200m) at Tamworth.

The five-year-old gelding, a son of Arlington, has drawn ideally in barrier two in the feature sprint with Chris O’Brien to ride.

O’Brien also rode the gelding last start when he ran a track record 1min 9.59secs to win a Newcastle Benchmark 70 over the 1200m. 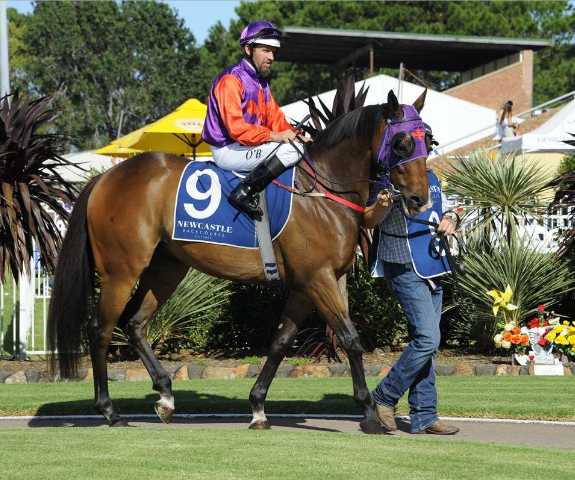 The Lion with Chris O'Brien aboard before his Newcastle win. Image by Bradley Photographers

The Lion, who won the 2017 Walcha Maiden, has won five times in 23 starts but in four starts at his home track he is yet to salute, albeit running a couple of seconds.

One of those seconds was his very first start in a race when he was runner-up to Larlabrook in a 1000m maiden on January 20, 2017 when he was decidedly smaller in stature.

“He was a little horse then,” Michelle recalled today. “He’s a lot better horse now. He was different in size, he’s a lot bigger now, matured a lot and is a nice, big, strong horse.”

She said his record-breaking win at Newcastle was a thrill and he’s improved again.

“That was a really good win (Newcastle). He pulled up really well I thought there’s a race in my backyard for him so I might as well back him up at Tamworth.

"He’s been working really well and feeling well. I haven’t been able to back him up before, always been some little thing with him.

"After his wins in Sydney there’s always been something go wrong after the trip so I haven’t been able to go straight back (to another race). Everything is right with him now though.”

After The Lion’s recent win at Newcastle Michelle arrived home to a crowd of people who all celebrated a surprise “25th” birthday party with her. The Lion also loved the attention as well.

The Lion’s Newcastle win was the best present of all and then Michelle topped it off by going to Scone last Friday and winning with “lazy” St Luke. That was another exciting success with Chris O’Brien, who rides and knows The Lion so well, also on board.

Tomorrow Michelle also has Ayham in at Tamworth: “He’s a tough old bugger,” she said. “Up in class but he always runs a big race.”

Ayham was also part of her first double at Tamworth last year when Michelle, who has her stable just on the southern outskirts of Kootingal, led in King Solomon and Ayham.

The next day she went to Sydney and won a Highway Handicap with The Lion. So a second career double including Ayham and The Lion would be another massive result for the cheerful Tamworth trainer.

Winning the Cellarbrations Open would be a big enough celebration for Michelle.

“All I know is he is fit and well and that he will run a good, honest race, and barrier two is also a bonus."