Goulburn's Sunday program has a strong representation of female riders across the seven-race card but it's in race one that the numbers really stack up.

In what could be a first at the tablelands track and a sign of the times, six out of the nine gallopers in Goulburn's opener will be ridden by female hoops. 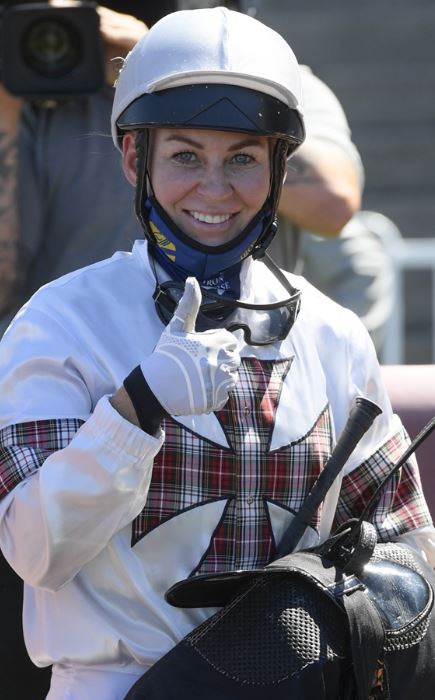 Kathy O'Hara - has five rides at Goulburn this Sunday. Image by Bradley Photographers

Of the sextet, Kathy O'Hara leads the experience stakes with Winona Costin, Jess Taylor and Kacie Adams the other senior riders in the race. Nyssa Burrells and Amy McLucas make up the 'small a' portion of the femme fatale featured in the opener.

There's more than a smattering of winning form among the group as well with four of the six having ridden winners in the past seven days.

Not to be outdone, trainers in the race have also got in on the act with Natalie Jarvis, Emma and Lucy Longmire also accepting in the race.

Nat Jarvis (Dragons Breath $2.30 favourite on TAB) is the only one letting the fraternity down by booking a token male in Blaike McDougall! (fair enough .... he has ridden five winners and nine placings from his last 23 rides!)

Amy McLucas rides Salute To The Sun ($4.60) for Emma & Lucy Longmire in the race and the young hoop likes the way the numbers have fallen.

"I think it's great that the girls are coming through and getting a lot more opportunity," McLucas said. McLucas has a busy schedule over the next few days with ten rides booked Friday through to Sunday.

"I haven’t had a chance to look at all the other riders as yet but this doesn’t happen very often. It's nice to see it becoming a bit more even I would say.

"Salute To The Sun is a genuine chance, not sure with the weather what's going to happen but she is at her best and should run up to her best too."

Whilst there's the immediate business of seven races to be run and won at Goulburn on Sunday, there's a few local trainers who are also busy adding the finishing touches to their first opportunity to qualify for a Country Championships tilt in 2021.

The tablelands club expects a strong Goulburn-based contingent to trek to Nowra on Sunday week for a crack at qualifying for this year's final via the SERA window. Goulburn Race Club's CEO, Robyn Fife, said a similar result to last year would be great.

"In 2020 Goulburn trainers delivered a trifecta of qualifiers via the SERA heat, with Tash Burleigh's Al Mah Haha running the eventual winner Gracie Belle to a short-head in the final of the Newhaven Park Country Championships at Royal Randwick.

"We wish Goulburn trainers who are chasing Country Championships glory this year all the very best over the next two months."

Racing returns to the tablelands on Sunday 21st February and it will be a 'turn up and tune in' type of raceday with Goulburn Race Club hosting its first "Sunday Sounds Live on The Lawn".

Goulburn's track is currently rated a Soft 6 for this Sunday's program.