The Brett Bellamy-trained Sugar Baby ($6.50 on TAB on TAB) could earn herself a second crack at qualifying for next month’s $500,000 Newhaven Park Country Championships Final at Randwick if she runs well on her home track at Coffs Harbour on Monday.

The mare went close to securing a place in the Randwick final on April 3 when she proved one of the surprise packets in the Northern Rivers Racing Association Country Championships Qualifier (1400m) at Coffs Harbour on February 13.

Sent out as one of the outsiders at $81 in the Qualifier, Sugar Baby ran out of her skin but was just collared late by the Graham Payne-trained Baileys ($15) and John Shelton’s unlucky runner-up Tara Jasmine ($1.70 favourite). 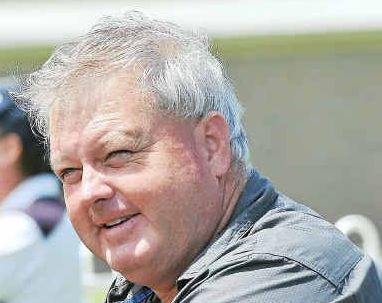 The top two finishers in the seven regional qualifiers across NSW go straight to the final, but horses who ran in any of the qualifiers can get another chance in the $150,000 Country Championships Wild Card over 1280m at Muswellbrook on March 21.

Brett Bellamy [pictured left] said his mare could be a Wild Card candidate if she runs well in Monday’s Class 2 Hcp (1200m) at Coffs Harbour.

“She would probably need to win Monday’s race to get into that Wild Card field at Muswellbrook, but that race is certainly on the cards,” said the trainer.

“She’s pretty consistent and I thought she’d run well in that qualifying race here at Coffs Harbour from her good draw and down in the weights - and she went so close to getting in (to the Final).”

It is mixed news for Bellamy with his two best chances – Sugar Baby and Jakuta ($15) - needing completely different conditions to perform at their best.

“Sugar Baby gets through wet tracks okay, but she is definitely better on top of the ground,” he said. “Jakuta, on the other hand, is an absolute swimmer and revels in heavy going.

"That was the problem at his last run at Grafton last week – the track just dried out too much by the time his race came around.”

Jakuta has won four times in heavy ground, most recently four starts ago when he had his first start for the Bellamy stable in a Benchmark 66 Hcp (1315m) at Coffs Harbour on December 30. He will be suited dropping back to Monday’s Benchmark 58 Hcp (1400m) after his last-start sixth of seven runners behind Bugalugs in last Tuesday’s Open Hcp (1206m) at Grafton.

Bellamy could have up to 11 starters at Monday’s seven-race meeting and has given comeback apprentice Jayden Barrie the opportunity on four of his runners.

Barrie, apprenticed to Kempsey trainer Hilary Dew, gave riding away for eight months last year after becoming frustrated with racing and with his weight struggles. But he couldn’t stay away for too long and returned with a bang in February to land a winner at his first ride back.

The 3kg-claiming Barrie scored on the Dew-trained Wewonya at Coffs Harbour on February 13, but has only had 10 unplaced rides since and mostly on long-priced runners.

“I’m always happy to give apprentices a chance and hopefully a couple of mine can run well for him and boost his confidence,” said Bellamy.

“I think we have a few runners who can run well without declaring any of them good things. Sugar Baby and Jakuta – depending on what the track rating is – should both run well if they get their right conditions.

“Venusian is resuming over 800m. He will be better suited over 1200m and 1400m and will find the 800m a bit short, but there is plenty of speed in the race and he could finish off well.

“And first-starter Newitt (to be ridden by Ray Spokes; $11) is going along nicely and can run a race on debut. Island Daze (a Jon Grisedale mount; $8) wasn’t beaten far last time out at Grafton (behind Patriot in an Open Hcp on February 18), but that race is very, very tough.”

Trainer Kris Lees could be set for a big day at Coffs Harbour with four of the stable’s five runners likely to run clear-cut favourites.