The Bob Milligan-trained six-year-old just failed to catch Canberra's Lolita Gold, trained by Neil Osborne, in the Wingham Cup at Taree on June 7 and meets that mare and another worthy field of gallopers from Sydney to Coffs Harbour.

Sydney's four-year-old gelding Microna is making a special visit to try and win the cup for trainer John Steinmetz, a former Kendall resident, and his wife Alison. John is a cousin of the new president of the Wauchope Jockey Club, Les Latimore who is in charge of his first cup.

But it is Texas Storm which has strung together many top performances in 11 starts this campaign that deserves a cup victory.

Milligan's son Glen said Texas Storm, again to be ridden by in-form Ashley Morgan, "has pulled up terrific...it is the best he has done". 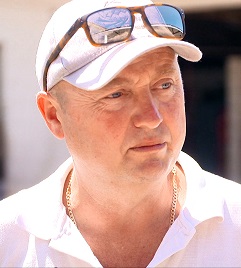 The only query for it and Lolita Gold is coming back from 1600m of the Wingham Cup to the new distance of 1450m, 50m less than the usual cup distance before the meeting was transferred from Port Macquarie.

"Our horse travelled on the speed last start...he wanted to go so the 1450m may not be a problem," Glen said.

Osborne said Lolita Gold had settled in well at the stable's "winter base" at Coffs Harbour, he is really happy how the five-year-old pulled up and she has won over 1200m in the past.

Jockey Chad Lever had the field on a string when he led all the way on the mare in the Wingham Cup but with he being disqualified the new jockey will be Port Macquarie's leading jockey Ben Looker.

"We didn't plan to lead...it was the way things went," Osborne said.

As for Microna, Steinmetz is very bullish about its chances as it was only beaten 2.3 lengths over 1300m at Newcastle last start and the winner, The Empire, confirmed that form with a win at Warwick Farm on Monday.

"My horse has come back well...he is a big horse and suited to all track conditions."

His dam is Canley Cares, bought for $1000 when John was a teacher, and all four progeny from her have won.

"The mare won a race at Warwick Farm," he added.

Fifth in the Wingham Cup, five-year-old gelding Acoustix, trained at Port by Tas Morton, is suited by the distance and turning track.

Morton's O'Driscoll won the Wauchope Cup at Port in 2019 and last year his Mister Smartee was beaten less than a length when third to Kempsey mare Prima Stella at Port.

He reckons the drop back in distance is in his gelding's favour as Port jockey Luke Rolls can dictate terms to his liking.

"My horse is rock hard fit and has pulled up extremely well from the Wingham Cup,'' Morton said.

"He is jumping out of his boots. He has had an easy week and a nice hit out at the track on Tuesday."

The chances don't end there with those likely to be in the finish able to handle the turning track and limited straight.

The other feature race, the M & S Print Bago Bluff Sprint over 1000m, has attracted many smart sprinters, obviously getting ready for the Grafton Cup Carnival next month and the Coffs Harbour Cup meeting afterwards.

One of them hoping to win the sprint and be exempt from ballot for the rich Kirby Handicap over 1000m at Grafton is five-year-old Grafton gelding Jule's Spirit, trained by John Shelton and to be ridden by Luke Rolls.

"My horse was only beaten a nose at Eagle Farm two starts back and wasn't suited by the leaderish track when fifth at Casino last start," Shelton said.

The gelding has had 26 starts for six wins and five placings and has won equally with three wins on good and heavy surfaces.

All the fields, form and replays for Sunday's Kempsey meeting