Tuncurry Racetrack will be a seafood lover’s paradise next Saturday with the wildly-popular Seafood Raceday providing some of the freshest seafood on the NSW Mid North Coast. 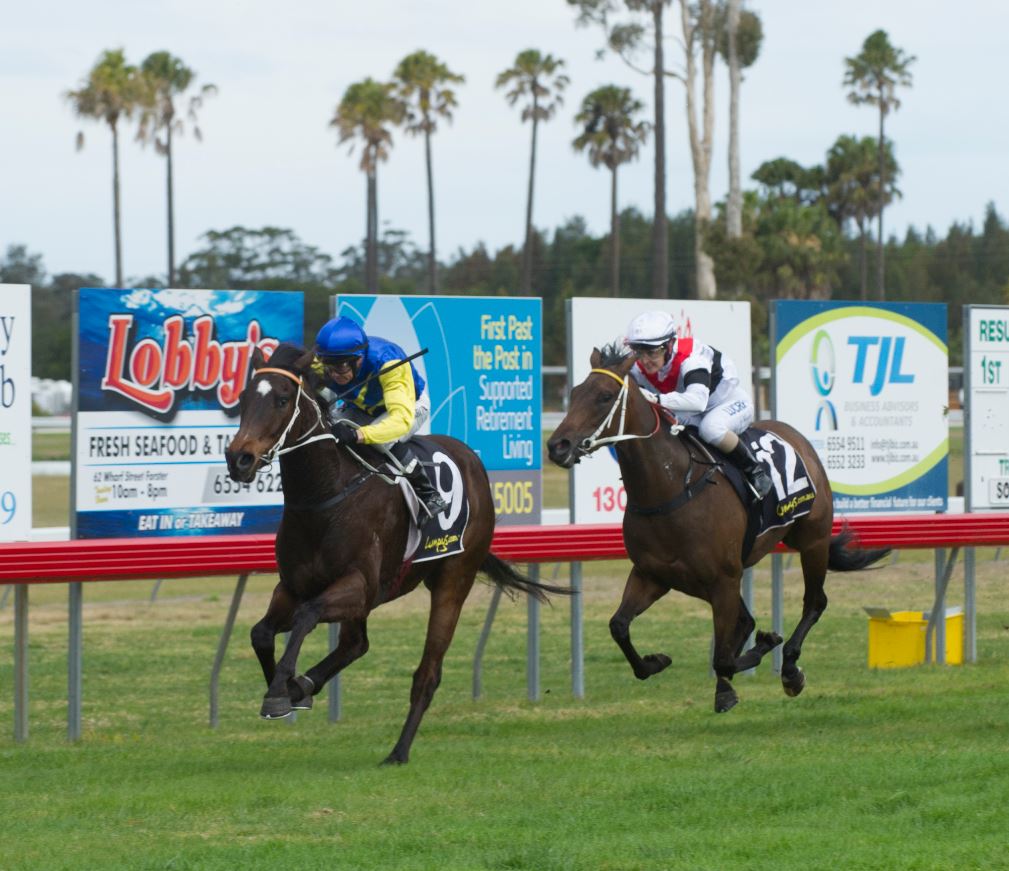 There'll be some great racing action and plenty of fresh seafood at Tuncurry on Saturday. Image by Steve White

“We’ll be selling fresh prawn rolls, BBQ fish cooked by the local fish co-op and premium Wallis Lake Oysters from Barclays, one of the biggest distributors in our area.

“And we will have the coldest refreshments, sandwiches, pies, hot dogs; in fact, there’ll be something for everyone!”

The club will be staging six races with the feature event the Tuncurry Beach Bowling Club Oyster Cup (1600m).

Free buses are running from Black Head, Smith Lake, Tuncurry and Forster with the bus timetable and other information on the club’s website – tuncurryforsterjockeyclub.com.au

Admission is $10 for non-members and $5 for members and pensioners with gates opening at midday. “You’ll see Coastal Country Racing at its Best!”

Meanwhile, Cowra Jockey Club is gearing up for its premier event, the Cowra Cup and Japan Cup Raceday next Sunday.

CJC – in conjunction with Cowra Bowling Club – will be hosting the annual Cup Calcutta the evening before at the club.

“This year we will see the return of the popular former jockey Allan Robinson along with league legends Alfie Langer and Trevor Gillmeister,” said CJC president, Peter Ford.

“These blokes had such a good time last year they put their hand up for another campaign in 2020.

“Calcutta tickets are on sale and it should be a great night with the legendary broadcaster Col Hodges giving his much-anticipated phantom call.

“Four-time winner of the Japan Cup, Zarhron will be lining up again after failing last year. This will be an amazing effort from the 10-year-old if he could grab the trophy once more.

“I know that all of Cowra will be behind the popular Andrew Molloy-trained galloper,” Ford added.

“It’s a Racing NSW Country Showcase meeting which means minimum prizemoney for each race is $30,000 with the cup now a $65,000 race,” Mr Bertram said.

“We will be providing live music as well as food trucks which will ensure we have a market vibe to the afternoon.”

Finally, due to the unprecedented Dunns Road bushfires that have devastated the region, Tumut Turf Club is opening the gates to the whole community next Saturday.

The Club is offering free entry but requests a gold coin donation towards the bushfire appeal.

“Our area has been devastated, especially Batlow and Talbingo and farmers in areas of Yaven Creek, Ellerslie, Talbingo and Tooma,” said TTC’s secretary, Jeff Hanson.

“So many other members of the community have been involved in fighting the fire or volunteering their services in other capacities, including our president David Rosetta, who is a volunteer firefighter.

“We will have free kids’ entertainment; a DJ and we want to offer the town and local communities a chance to wind down after such a tense period.”