Scotty Has New Owner Beaming From Ear To Ear

Skygge ran his last race at Orange on 23rd November. By 27th he was easily jumping 50cm under the guidance of talented young equestrienne Stephanie Mackillop.

“He raced on a Friday and I rode him the following Tuesday and he was so willing to learn and very quiet,” Stephanie said. “Even better he is showing lots of talent already.” 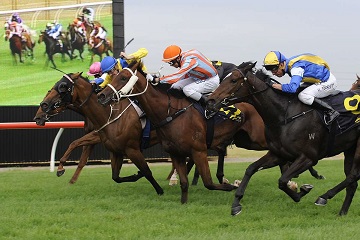 Skygge’s owners made the decision to retire him after a disappointing 11th of 12 finish. The will to win he once had was gone and their focus turned to finding him a quality home.  One of the owners Neill Ross had had Skygge, affectionately known as Scotty, since he was weanling so nothing but the best would do. He turned to his long-time friend Jock Mackillop who welcomed Skygge to his Sydney property, Highgrove, for his daughter Stephanie.

At just 22, Stephanie is a rising star on Australia’s showjumping circuit and although she has competed on thoroughbreds before, Skygge is her first off-the-track retraining project.

“I really enjoy retraining because you can mould the horses into what you need to them to be,” she said. “When you succeed on one you know it’s because of all the hard work you put in. It’s very rewarding.”

Stephanie, who owns Team Mackillop Equestrian, has spent the past few weeks taking Skygge through the basics. They have been doing flat work, cantering on both leads and going over small jumps.

“He’s been easy to teach so far,” Stephanie said. “He’s very soft, listens well and is not spooky at all.

“Racehorses need to learn to use their body in a different way for showjumping which can be quite confusing for them.

“They need to get accustomed to new gear, a heavier saddle, longer stirrups and different aids but he has taken to it like a duck to water.” 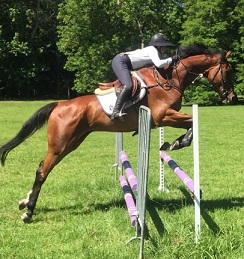 Stephanie puts "Scotty" through his paces.

Stephanie is so confident in Skygge’s ability she has entered him in the Bega Showjumping Cup at the end of the month.

“That will be the real test for him,” she said.” “It’s four days of jumping. We’ll start small and go from there.”

As a budding showjumper who has successfully transitioned from racing life, Skygge needs a new name.

“I think I am going to call him Beam Me Up Scotty,” Stephanie said. “His stable name was Scotty and he’s leaping into the sky so it makes sense and it’s a bit of fun.”

Former owner Neill Ross, who has been part of the racing industry for more than four decades, couldn’t be happier with the new partnership.

“I’m over the moon,” he said. “I worked for trainer Kevin Hayes as a young man and he instilled in me the importance of ensuring the future of each horse after racing. Kevin always found good homes for his horses and never put any through a sale yard.

“A horse is not a short term phase, it’s a lifetime commitment and Beam Me Up Scotty is going to have a cheer squad at his competitions for the rest of his days.”