Tips and race by race preview by NEIL EVANS for Friday’s Scone meeting. Track is rated a GOOD 4 with the rail TRUE so should play fairly even for Scone's Racing NSW Country Showcase meeting.

We kick off a terrific card with the maiden girls and the $250K purchase Medaglia d'Oro filly 4. FALSE STEP ($1.75 favourite on TAB) can start her career with a bang. Has had two trials for the leading provincial stable and makes her debut in blinkers.

Dangers: A big watch on resuming Warwick Farm filly 3. BARGING TESS ($4.80) who has also been fitted with two trials. Liked the trial work of Kermadec filly 5. JUPITER'S PEAK ($11) who debuts for top-notch Gosford trainer Angela Davies, while local filly 6. KEEN CONTRIBUTER ($8.50) impressed in a smart trial win at the track and draws to get a handy run.

How to play it: False Step to win and box trifecta 3,4,5,6
Odds and Evens: Split 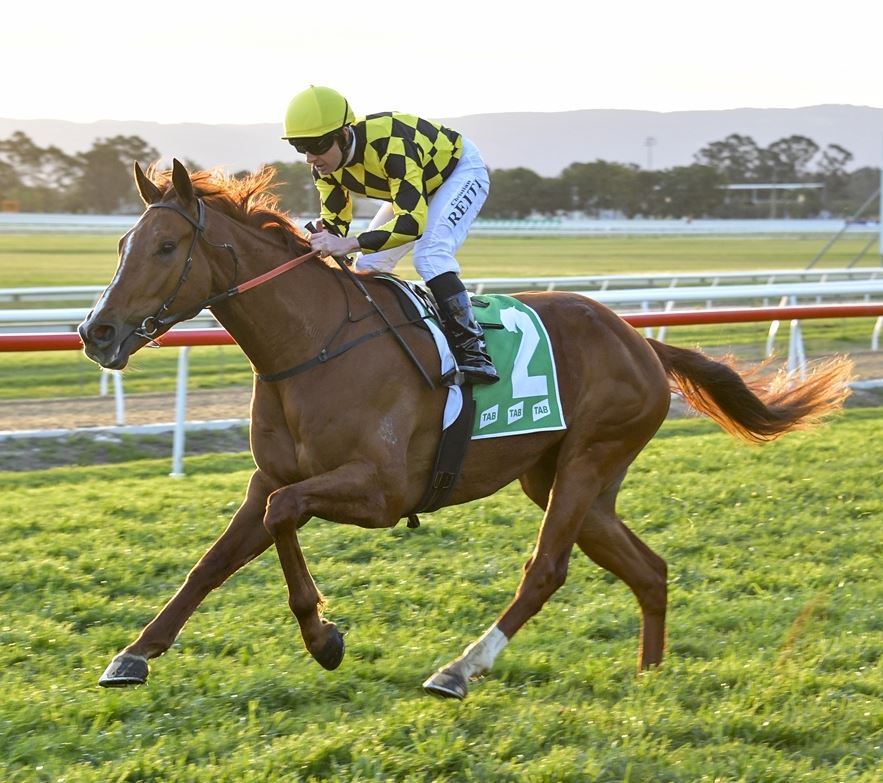 Progressive local 4YO 1. TOTAL RECALL ($1.50 fav - pictured left) put two wins together up to BM 64 grade before finishing hard to just miss in BM 72 metro grade, after making a mess of the start. That was a month between runs and coming back to country level, he should be too strong for these with the huge weight off-set by a 3kg claim.

Dangers: Dubbo 4YO 2. HALLBERG ($6) has won his last two both from on and off the speed, and is hard fit. Taking on some better ones here but gives the impression he'll stay all day. Consistent Moree mare 7. TRUE BELL ($7) has won two of her last three although this is tougher and has drawn wide in gate 9.

How to play it: Total Recall to win
Odds and Evens: Split

Now the boys' turn over that same trip as the opener. Keen on Wyong-based colt and first starter 5. THAILAND ($4.80) who was tuned up for this with a smart and easy trial win over 1000m at Gosford. By a former Cox Plate winner (Adelaide (Ire)) and draws to dictate, with leading country jockey Greg Ryan aboard.

Dangers: There's plenty of them. Capable 5YO 1. KING OF SEAS ($3.20) hasn't started for 19 months but returns for a new and leading country stable. Was very competitive beyond the mile early last year and looked forward enough dominating a recent trial here over 1000m. Improving Newcastle 3YO 3. ALASTOR ($3 fav) was big odds when beating all bar the winner on debut, finishing hard after not having much luck in transit. Local improver, with senior jockey booked. Improving and well-bred 3YO 9. LINCOLN PARK ($9) is drawn to get a softer run after covering plenty of ground at Port Macquarie where still found the line okay.

Testing sprint. Talented Tamworth 4YO 1. DANZA IN THE DARK ($5) is ready to win third-up with blinkers going on. Just missed resuming here then wasn't suited getting home on the much tighter Armidale track. Drawn to get good cover off the speed and a stronger rider goes on.

Dangers: Promising filly 13. MISS KOJIKI ($1.90 fav) resumes from the inside gate off two nice trials. Took on some smart 2YOs in only two runs last prep and should be in the finish. Liked the way Tamworth 3YO 12. TAKETHESHOT ($10) hit the line third-up at home and should relish the bigger track, while improving local 3YO 9. LORD BRONN ($10) is also on the cusp, having been placed in his last three.

Out to the mile we go and Gosford mare 1. BUCKLE UP BABY ($5) can make it two straight after sweeping home to win a handy BM 60 at Canberra. Carries the same weight after rider's claim and loves a big track whereby she can settle back and be produced late.

Dangers: Good colt 8. TEMPEL ONE ($2.10 fav) can strike back on his home track fourth-up. Was very strong in Highway grade two starts back after covering a stack of ground before disappointing when looming to win at Randwick. Stays at the trip and should be peaking. Tough 3YO 9. BADBOY McCOY ($8) made it two from his last three fighting on hard at Gunnedah and while this is tougher, he's hard fit deep into the prep.

How to play it: Buckle Up Baby to win
Odds and Evens: Split

Strong race. Tamworth 4YO 8. FARMER'S FRIEND ($5.50) failed to run on third-up in a BM 64 at Newcastle but didn't have much luck and likely found the track too hard. Previous two runs this prep were terrific motoring home from a mile back and he'll relish being tucked away on this big circuit down 3kg.

Dangers: Have a big opinion of Rosehill 4YO 1. SECRETLY AWESOME ($3.40 fav) who resumes off two controlled trials. Won twice from only three starts in his first prep and capable of carrying this weight fresh. Home track 5YO 5. FREE RIDER ($6.50) charged home for a dominant win at Muswellbrook before no match for the winner in tougher grade at Newcastle. Better suited here and drawn to get a softer run around midfield. Watch the betting on resuming Tamworth 5YO 2. WHITELEY ($7) who has had two trials and will be running on.

How to play it: Farmer's Friend each way and box exacta 1,5,8
Odds and Evens: Split

Terrific sprint with a stack of chances. Progressive Newcastle filly 13. ZEFTABROOK ($5.50) is the one to beat. Didn't do much first-up at Wyong but is a noted second-up performer and much better off on the bigger track.

Dangers: Smart Newcastle mare 12. PEARL ROAN ($5.50) has been freshened since an ordinary effort in a BM 64 at Newcastle and has a top-notch record at this track. Improving Gosford mare 7. MORNAY ($5 fav) finished best to win a handy BM 65 at Canberra after taking on metro company, although not well-weighted in this. Expect local 4YO 10. REVEAL THE MAGIC ($15) to be finishing hard third-up over a little more ground, while keep a watch for evergreen 1. PROFESSOR MARX ($17) finishing fast at big odds with a 4kg claimer off-setting the allotted weight.

How to play it: Zeftabrook to win
Odds and Evens: Split

We wrap it up with another competitive sprint and this looks the domain of talented local 4YO 5. LEO ($4.40) who is off a freshen-up. Has been consistently good in Highway company including a luckless fourth behind eventual The Kosciuszko winner It's Me, and well placed back at home with a 2kg claim. Trainer Mark Schmetzer is going great guns.

Dangers: Muswellbrook 4YO 7. TOTO ($2.70 fav) has plenty of ability, charging home to beat a handy Class 1 field at home, although the inside draw is a query for one who likes to settle back, while must include Taree filly 13. LUCKY SHADOW ($3.30) who flew late to miss by a whisker resuming at home.

How to play it: Leo each way
Odds and Evens: Odds a special