He may have ridden an Australian record 4447 winners in his amazing 49-year career but the legacy of jockey Robert Thompson that will stand, even if his benchmark is one day passed, is his reputation. 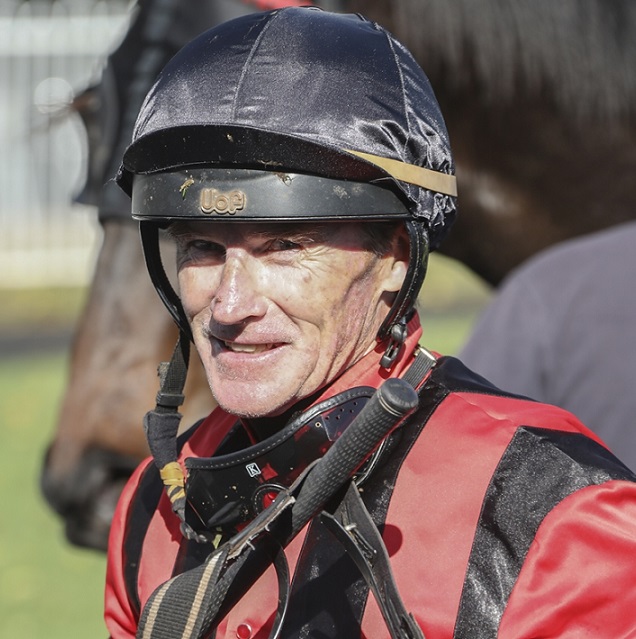 At the end of November, 63-year-old Thompson called it a day – ‘rode off into the sunset’ are his words – and he did it on his own terms.

He never chased glory. Seven Group 1 wins came his way, he had success in Hong Kong, is beloved across Australia, and leaves with the knowledge he wouldn’t want to change anything.

“Racing owes me nothing,’’ Thompson said.

“I’ve lived the dream, had my fun in the sun so it’s time to ride off into the sunset now. And I don’t regret one little thing.

“Back in 2004 when I had a fall and broke my ankle I was out for two years, I desperately wanted to get back because I didn’t want to go out that way. This time I’m going out when I wanted to.

“It’s been overwhelming, we’ve had lots of calls and messages. It’s been absolutely wonderful.”

It was Christmas 2020 when Thompson decided that the following year would be his last.

It wasn’t known to him at the time but his last ride was at Port Macquarie in July, also the scene of his 4447th career win on Contributingfactor in April last year, and under more normal circumstances he may have been able to have a farewell on the track.

“When Covid hit again it meant I couldn’t get up to Cairns and do all their Cup carnivals so that was enough for me.”

It all started one day in April 1973 when, without any fanfare, a young Robert Thompson had his first race ride at Newcastle under the watchful eye of his grandfather Norm Collins.

The horse he rode wasn’t competitive.

Seven rides later the notched the first of what would be an unparalleled number of wins on It’s Regal at Wyong. He enjoyed wonderful success with his father Arthur and memories of that association are as special to him, if not more, than his Group 1 wins.

“Working alongside dad has been wonderful,’’ he said.

“I started at 14 and you finished your apprenticeship when you are 21 in those days. I had a long apprenticeship and as soon as I came out of my time dad took over the stable.

“Dad and I won five races in one day at Cessnock (1987) including the Cup. That was a pretty special day.

“I used to love going to Sydney to ride but I couldn’t wait to get back home, I prefer the country to the city.” 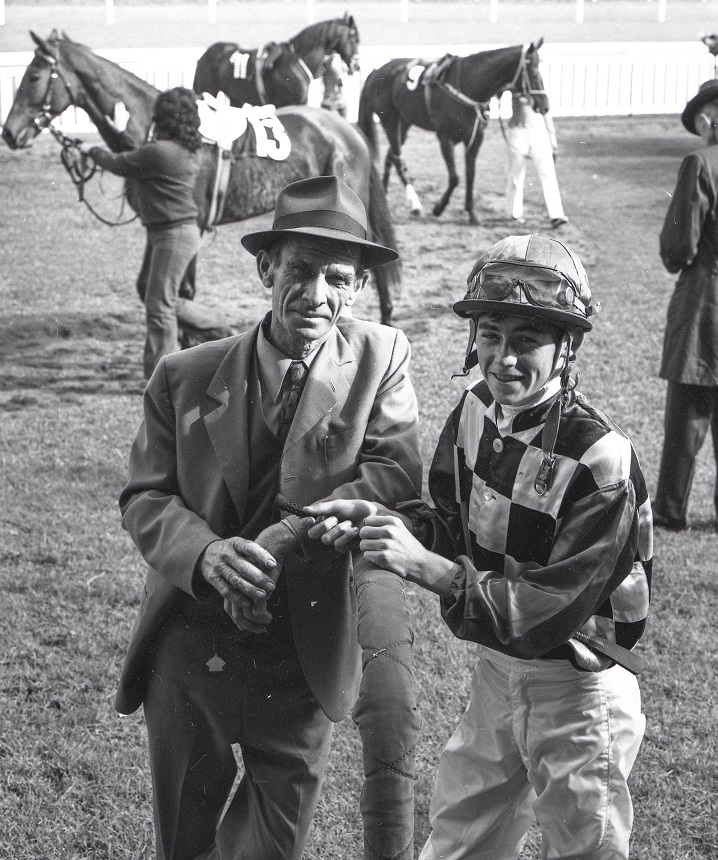 A young Robert Thompson with his grandfather Norm Collins.

Being a Cessnock local there’s no race Thompson wanted to win more than the Jungle Juice Cup. And he won the “special race” 11 times.

The story of his first winner in what would develop into the cult racing event of the Hunter is quite a tale. A horse called Top Hat Joe, trained by his father, who arrived at their Cessnock stable from Ray Guy having enjoyed success as a younger horse but he had gone off the boil.

He was quite a handful and as he was preparing to leave the stable to run in the Jungle Juice Cup of 1982, just the second edition of the race, the horse took a disliking to the truck.

So Thompson rode him to the racecourse.

“He played up that badly on the truck dad said to throw the saddle on him and ride him over,’’ he said.

“It must have done something. It’s about two and a half miles as the crow flies, we used to live on the other side of the town in those days.

“We rode down the back through the bush, we had to go through a coal mine and then over a couple of railway lines and then we hit Cessnock Racecourse.

“We got him from Sydney, he was a pretty smart three-year-old in Sydney. His form tapered off before he came to us.

“He only won by a neck but I recall he was always going to win the race. Riding him to the races might have been the trick.”

He might be one of the more memorable horses Thompson has ridden but old Top Hat Joe doesn’t rank among the best.

That honour goes to Romantic Dream. As it happens the horse was foaled in the same year Thompson made his debut. He notched the first two of his seven Group 1s on the superstar youngster in the 1976 Brisbane Sires’ Produce and the race now known as the JJ Atkins.

“Early on he was brilliant, he beat Family of Man and Surround, he won in five states,’’ he said.

“He beat Luskin Star at weight-for-age, I was able to win a Lee Steere Stakes in Perth. He was just a bit of a freak at that stage, he had a big motor and a big finish on him.”

Among Thompson’s other Group 1 successes were Sharscay for Guy Walter in the 1995 Canterbury Guineas and the now Vinery Stud Stakes and ATC Oaks on Heavenly Glow in 2008 for his great mate Ross Stitt and trainer Allan Denham.

But what he regards as the moment of all moments didn’t happen on the racetrack, though it was because of what he’s achieved on the racetrack. In 2015, Robert Thompson was inducted into the Australian Racing Hall Of Fame.

“Being inducted is probably the best race that I’ve won,’’ he said.

“It was in Brisbane and it was the same night as Glen Boss was inducted.”

He also received a Member Of The Order Of Australia (AM) in 2015 and three years later entered the Newcastle and Hunter Hall Of Fame.

Thompson said he couldn’t have sustained such a career without the support of wife Jenny, sons Simon and Brent and their three grandchildren.

“When the time comes Jenny and I would like to do a fair bit of travelling,’’ he said. 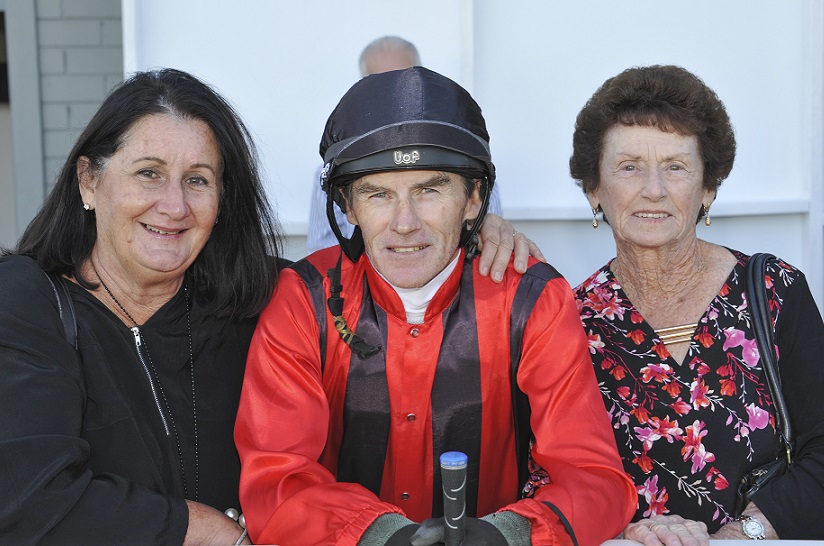 “I’ve been lucky enough to ride in every state in Australia and we’ve made a lot of friends but you only spend a day there at the races and you’ve got to go.”

So how do we know for sure Thompson’s 4447 is accurate? He did start riding in 1973, computers and spreadsheets were hardly household items and there’s no reliable racing database.

If there was one thing members of the racing media could depend on, especially after he notched his 3000th winner at Randwick in July 2003 – on a horse called Tummler – and he reached 4000 mark in May 2014, it was that Thompson always knew where his tally stood.

The answer is old fashioned bookwork. And at home he has a pile of books that represent every race he’s ever ridden in – around 30,000 dashes to the winning post.

“I used to write my rides down in a book every time I had a ride. That’s how I was able to keep up with my tally,’’ he said.

“From day one. When I started at 14 years and nine months.

“A lot of other jockeys would be able to get that number too if they wanted to come and live in the country and do what I did.

“It is only a number, but it is a big number. And I’m pretty proud of it.”

If the number is actually higher then it only adds to the legend.