Trainer Brett Dodson hopes he can welcome back his sidelined apprentice Kyle Wilson-Taylor with at least one winner when the talented teenager resumes riding at Thursday's Country Showcase meeting at Coffs Harbour.

Wilson-Taylor, who made his riding debut back in July, has been off the scene since a Grafton meeting on September 25 when he fractured his right wrist after being dislodged from Better Be Good just after the winning post.

The 19-year-old resumes riding on Thursday with six rides on the eight-race program, including two for Dodson - Florelle in the Signarama Coffs Harbour Benchmark 66 Showcase Handicap (1200m) and Surf Coast in the Mid North Coast Physiotherapy Class 3 Hcp (1400m).

"Kyle kept his weight down while he was sidelined and is very keen to be finally back riding. He just turned 19 the other day, so hopefully, I can give him a belated birthday present with a winner on Thursday at his first day back riding," said Dodson. 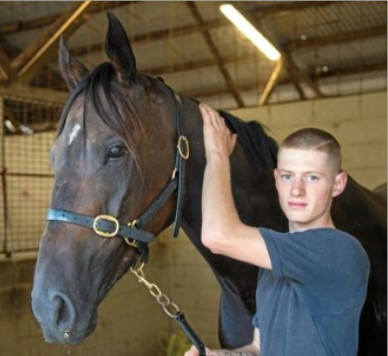 Dodson is banking on a return to the Coffs Harbour track to help Florelle recapture winning form after a couple of recent below-par performances.

Originally trained in Victoria by George Osbourne before brief stints with trainers Damien Lappin and Donna Scott, Florelle has had just the four starts for the Coffs Harbour-based Dodson. She had her first start for Dodson at Coffs Harbour back on August 2 when she ran a slashing second to Alot Like Home in the $40,000 Dan Baker Sprint (1200m).

Dodson then had to give her a break after she suffered bad bruising to a foot, but she returned with a sound fourth to Hydrazine in the Spring Flyer (1000m) at Coffs Harbour on October 2. Florelle then disappointed at her next two starts when sixth to Choice Larga at Port Macquarie on November 15 and a last-start eighth to Chloride at Ballina on November 25.

"I just don't think she got around Ballina the other day and she should appreciate being back on the roomier track here at Coffs Harbour on Thursday," said Dodson.

"Her two previous runs here were very good. She ran a terrific race first-up in the Dan Baker, but then suffered bad bruising to one of her feet.

"Class-wise, on her best form she should certainly be right up to winning Thursday's race, but it's a matter of her handling that weight." Florelle will carry 60.5kg after Wilson-Taylor's 3kg allowance.

Dodson also thinks Surf Coast is a winning hope for Wilson-Taylor in the Class 3 Hcp (1400m).

"Surf Coast has got the bad alley (gate 17) but should be hitting the line strongly stepping up to the 1400m at his third run back," he said. Dodson also thinks Trust In Cash, to be partnered by Luke Rolls, can figure in the finish of the Maiden Plate (1400m).

Wilson-Taylor's other rides on Thursday are first-starter Impeccably (race one), Tilbury Lodge (race five) and Arrogant Boy (race seven) for Coffs Harbour trainer Sally Rogers, and Plectrum for fellow local trainer Paul Smith in the final event. Plectrum, first-up since September, is another of Wilson-Taylor's rides to have drawn awkwardly, coming up with gate 16 in the Class 2 Plate.

Gold Coast trainer Toby Edmonds looks to have a strong hand at Thursday's meeting with his three acceptors - first-starter Spirit Of Indigo (3YO Maiden Plate), Casurina Star (Maiden Plate) and Nooks And Crannies (Class 3 Hcp). I Am Invincible filly Spirit Of Indigo looks primed for a bold debut peformance after trialling well at the Gold Coast and Doomben recently.