Tough front runner Samadoubt could earn an iron horse tag if he takes on next week’s $180,000 Albury Gold Cup. 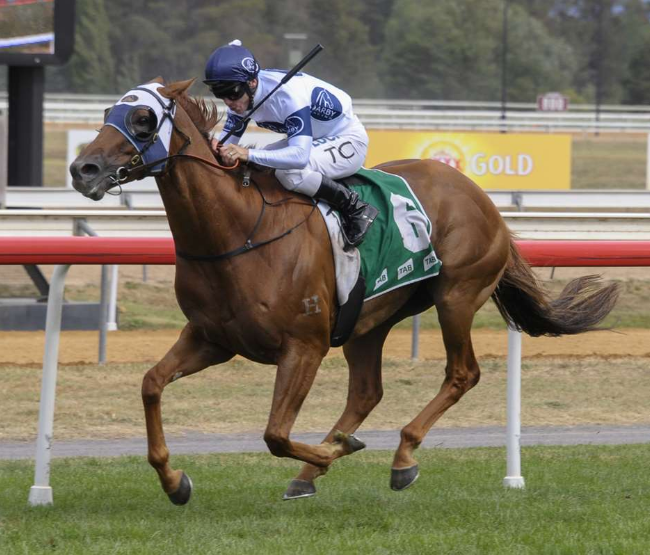 However, The Bjorn Baker stable is also looking at the Listed Commercial Club Albury Gold Cup (2000m) on Friday week and has not ruled out giving Samadoubt his third start in 12 days.

“The Albury Cup is on the radar but he is racing first in the Sky High at Rosehill on Saturday," said Baker’s racing manager Jack Bruce.

"We will have to see how he pulls up and then make a decision. We have until next Wednesday when the acceptances are taken for the Albury Cup.”

The weather may play a role in plans for Samadoubt as the Rosehill track is certain to fall into the soft to heavy range over the next 24 hours if the forecast of heavy rain for Sydney is correct.

Samadoubt has won three times from 13 starts on soft and heavy tracks. He recently won on a soft 6 over 1600m at Warwick Farm on February 9 but failed at his next start on a soft 7 in the Parramatta Cup (2000m) at Rosehill before bouncing back on good ground to win the Canberra Cup (2000m).

The Canberra Cup is expected to provide a number of Albury Cup entries with the second to fifth placegetters – Taikomochi, Almost Court, Domed and Green Sweet - set to join Samadoubt as nominations when they close on Monday.

Almost Court, last year’s Canberra Cup winner, showed a strong return to form with his third placing behind Samadoubt while Green Sweet won the Albury Cup two years ago when trained by Jean Dubois. He is now with Goulburn trainer Danny Williams.

The Gai Waterhouse/Adrian Bott 5YO Taikomochi made a game attempt to run down the front-running Samadoubt in the Canberra Cup when having only his second start in 10 months.

Waterhouse has been trying to win an Albury Cup for more than 12 years but her best results have been last year’s second with Supply And Demand, a third placing with Hippopus in 2016 and fourth with Queenstown in 2015.

Almost Court’s co-trainer Barbara Joseph is also keen to break her Albury Cup drought after more than 25 years of trying to win the richest country cup race in NSW.

Joseph has been a long-time supporter of the Albury carnival but her best Albury Cup result was a second placing with Goodwood in 1999.

Joseph has set a team of 10 horses for Albury next week after welcoming the return of the carnival to its traditional two successive days of racing on Thursday and Friday.

"Almost Court will be going around in the Albury Cup and Mookareena will target the Guineas,” Joseph said. “At this early stage, I think I will have eight to ten horses over the two days."

Randwick trainers Peter and Paul Snowden has also set his sights on the Albury Cup with the consistent Emperor’s Way following his third in last Saturday’s Listed Randwick City Stakes (2000m) won by Hiyaam: “He will be nominated and we will make a decision after we see the entries,” said Peter Snowden.

Albury’s former leading trainer Brett Cavanough is also set to make the trek from his Scone base for the carnival with a team for both days of the $670,000 carnival.

"At this stage it could be four runners or it could be as many as 10,” Cavanough said. "We will definitely have runners for the feature races on the Friday.”

Cavanough dominated SDRA training premierships for a decade when based in Albury. He won the 2013 Albury Cup with Niblick and returned with a team last year to win two races at the carnival.

Former Victorian trainer Mitchell Beer, who took over Cavanough’s Albury stables 18 months ago, has 15 horses set to race over the two days of the carnival. Beer has more than 40 horses at work with his team winning more than 30 races in the last 12 months including 20 this season.

Victorian entries for the Albury Gold Cup are set to be led by nominations from the powerful Lindsay Park stable of David Hayes, Tom Dabernig and Ben Hayes.

The Lindsay Park stable has recorded two wins (Growl/Extra Zero) and a second in the Albury Cup since 2010.