Australia’s longest apprenticeship will finally end in June for Kath Bell-Pitomac and the icing on the cake would be to win today’s Newhaven Park Country Championships Qualifier at Mudgee (1400m).

Bell-Pitomac, first apprenticed in 2002, has had a stop-start career plagued with injuries and raising a family, but all of that would be forgotten if the Mick Mulholland-trained Old Harbour takes out the $150,000 Central Districts heat and book himself a spot in April’s final at Randwick. 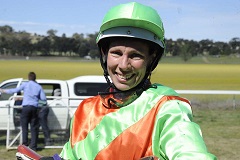 “This is the first time I have ridden in a heat which is pretty special in itself, last year I wasn’t quite back from my Tamworth fall, we had Divine Jewel and I got to strap her, so I am very happy to be riding this year,” said Pitomac.

Mullholland has played an instrumental role in resurrecting Pitomac’s career, even going as far as shifting his horses from Dubbo to a Wellington base.

“He has been a huge part of me becoming an apprentice and supporting me all the way through, I’m glad he stuck with me and didn’t ditch me for somebody else,” she laughed.

“When you’ve got the likes of Hugh Bowman coming out it’s hard to compete with those boys!”

It hasn’t been plain sailing to get Old Harbour back to the races in time with a stone bruise causing the five-year-old to miss plenty of work. Hence why Old Harbour was given a testing trial on Monday at Bathurst.

“Once he got over that issue we had to cram the fitness in but he pulled up great after the trial, he was happy and bouncing around the next day so hopefully he gets all the benefits of the hit out without it knocking the edge off him,” she said.

“He has a massive heart and even if fitness is against us coming into it, his heart will overcome it, I just need to get him into a good enough spot.

“When I saw barrier one I was really happy with that, I won’t have to fight the challenge of being caught wide.”

Pitomac, who rides all of Old Harbour’s work being one of only two trackwork riders based out of Wellington, has become smitten with the Your Song gelding, and a win today may be enough to surpass Demonize as her stable favourite.

“When we got him he had only had three starts and had had two years off so he was basically a five-year-old horse with a two-year-old brain,” she said.

“Every race you’re in you are a chance, it doesn’t matter which horse it is or what the other horses are, he is honest, tries hard and if we can have a little bit of luck we are well and truly in it.”

Check out the fields and form for Mudgee on Sunday.